Nigeria striker, Asisat Oshoala, has opened up on her admiration for Super Falcons legends Mercy Akide and Perpetua Nkwocha during her youthful days. 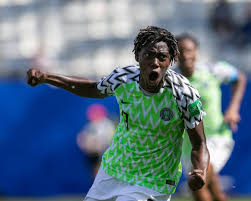 While missing a chance to play alongside Akide, Oshoala made her senior debut in 2012 and was privileged to star alongside Nkwocha before her retirement.

She only burst on to the international scene in 2014 at the U20 Women’s World Cup in Canada where she scooped the golden boot and golden ball despite the Falconets finishing as runners-up.

Since her breakthrough, the FC Robo product has gone on to win three African Women’s Cup of Nations titles in four outings and played at two Women’s World Cups, in Canada 2015 and France 2019.

In January 2020, she was named African Women’s Player of the Year for the fourth time following her successful season with Barcelona – matching Nkwocha’s long-standing African record.

The 26-year-old has shown some real potential in attack and has long looked up to players like Akide and Nkwocha, who were able to score glorious goals during their careers.

“My favourite players were Mercy Akide and Perpetua Nkwocha,” Oshoala disclosed in an Instagram live interview with the Nigeria Football Federation.

“Perpetua was the player that when they come from abroad, I watched her closely when I just joined the Falcons and I admired her a lot.

“She doesn’t know but as a young girl, there are these people you look up to and want to be like. I love Perpetua’s style of play.

“I followed her closely when I was first called up to the Super Falcons camp and I learned a lot of things from her.

“For Mercy, I used to watch her games and I really modelled my game after them because these are female players that I always watched when I was pretty young.

“She will be the link between the midfield and attack. She plays more like a No 10, she likes to get the ball and bring it forward.”