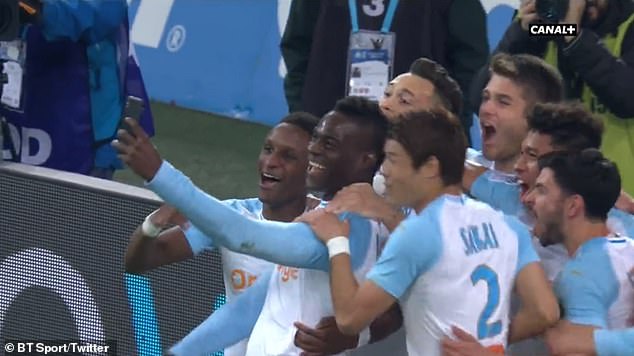 Asisat Oshoala has openly shared love for Mario Balloteli, the showbiz footballer who amused fans with his goal and celebration at the weekend.

The Nigerian female footballer who could not hide her admiration not only after Balloteli broke the deadlock for Marseille against Saint Etienne,,, but more to her delight was how Mario took a selfie photo shot with his teammate to celebrate the goal.

Consequently Balotteli started trending online and Oshoala joined the blitz by retweeted a video clip of the striker’s goal with caption; ‘what A Goal from Balotteli”, and ” And that Celebration”.

Oshoala’s warm mood reflected in what she wrote on the Balotteli’s video and the red love image she posted along with it . See tweet above.

Mario collected a smartphone from a nearby cameraman to brilliantly take a selfie with team-mates after his strike in the 12th minute on Sunday.

The goal was his fourth league goal in six appearances for Marseille since making his move from Nice in the January transfer window.

And what a strike it was. ‘Super Mario’ met Florian Thauvin’s in-swinging corner with an acrobatic volley to send the Stade Velodrome into frenzy.

But then, in typical Balotelli fashion, he had a celebration to match. There have been some memorable celebrations down the years and he added another one to his scrapbook.

“Why I composed the Champions League Anthem”