A 50-man delegation comprising players and officials of the Egyptian National Team breezed into the country on Sunday ahead of Tuesday’s international friendly against the Super Eagles of Nigeria at the Stephen Keshi Stadium in Asaba. 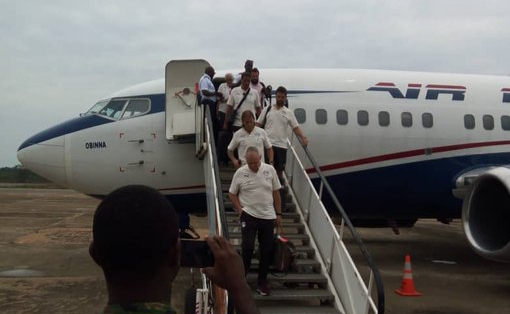 The team arrived Asaba this afternoon and were driven straight to the Golden Tulip Hotel n Asaba.

Both sides are using the match to commence preparations for the Africa Cup of Nations in June.

“We play always to win. We try to do our best.For us it is an important because Nigeria is a very tough team. It is important because it is our last match before the tournament for our young players,” said Assistant coach of the team, Tito Garcia Sanjvan.

Egypt will be without key player Mohammed Salah who was dropped by the team handlers to give room for upcoming players.

Nigeria ended their 2019 AFCON qualifying campaign after seychelles a 3-1 winlast Friday while Egypt drew 1-1 with Niger to end their campaign.

Egypt it will be recalled denied Nigeria the 2017 Afcon ticket in 2017 after securing a 1-1 draw at the Sani Abacha Stadium in Kano in the first leg and 1-0 win in the return leg courtesy of a Salah strike in 2016.