Nigeria lost 2-1 to England at the prestigious Wembley stadium in a pulsating friendly encounter as both sides fine tuned strategies ahead of the 2018 FIFA World Cup.

SportingLife.ng rank the performances of Super Eagles players in a game that witness two different halves of football:

The Deportivo La Coruna reserve team goalkeeper made a decent save from Kieran Trippier’s freekick. He stayed strong to save from John Stones and later Jesse Lingard. However, Uzoho made a howler of Harry Kane’s shot as it allowed it escaped his grasp and went in. Rating: 5

Newly signed Brighton & Hove Albion defender, Leon Balogun had a clash of heads with teammate Joel Obi and it affected his performance and was substituted at half-time. Rating: 4

Ekong did not enjoy a great first half like the rest of the team but improved in the second half and made a fantastic tackle to stop Welbeck from getting the third goal. 7

Bursaspor right back, Shehu wasn’t composed and did not have his best game for the Eagles. Rating: 4

The FC Amkar Perm left back played for 90minutes but never ventured forward to help the attack. He had a quiet match unlike on his debut where he scored against Argentina. 5

The Torino midfielder had a poor game and was rash in his tackles. He did not offer the protection required for the defenders or presence to free up Mikel Obi in midfield. Rating: 3

The Trabzonspor defensive midfielder failed to provide protection for the backline and lacked confidence in possession. Rating: 3 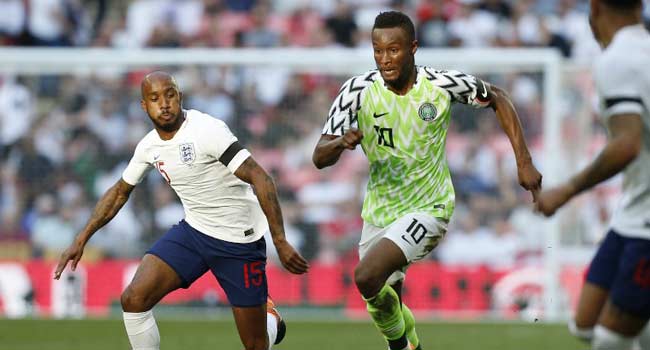 The Tianjin Teda had perhaps his poorest 45minutes in Super Eagles colours. He improved in the second half but never had the type of impact he usually commands for Nigeria. Rating: 5

The Arsenal man was the only Eagles star with a sense of adventure but was crowded out most times in the first half. The second half was different as he influenced the game from midfield and grabbed a goal. Rating: 8

The Chelsea wing-back was absent in the first half, although he had Nigeria’s second shot on target. He was truly below par in this encounter. Rating: 5

Ighalo had Nigeria’s first shot on goal in the 36th minute and it was well held by Jordan Pickford. The Changchun Yatai striker lack real service in the first half but hit the post in the second half and was more involved. Rating: 6

AFTERMATH OF ENGLAND DEFEAT: Eagles’ not ready for World Cup–Rohr

Cristiano Ronaldo not the best I played with – Rooney

Cristiano Ronaldo not the best I played with – Rooney