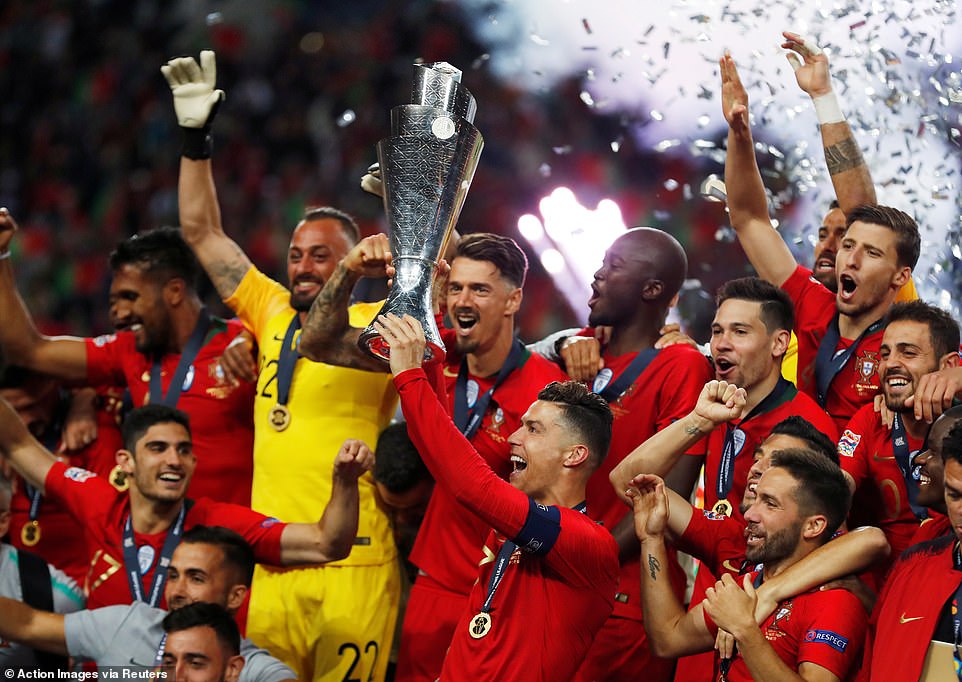 Portugal added the inaugural Nations League title to their Euro 2016 triumph as Goncalo Guedes’s strike on the hour won an underwhelming final 1-0 against the Netherlands in Porto on Sunday.
The Dutch defensive pairing of Virgil van Dijk and Matthijs de Ligt largely kept Cristiano Ronaldo quiet, but Valencia winger Guedes proved the match winner as his shot had too much power for Jasper Cillessen in the Netherlands goal.Portugal had the advantage of an extra day’s rest and not being forced to extra time against Switzerland in their semi-final as the Dutch were in seeing off England on Thursday.

And the hosts looked the fresher throughout with Ronald Koeman’s men happy to wait for their chance to counter-attack.

The match had been billed as a showdown between Ronaldo and Van Dijk but with the Dutch captain again rock solid at the back, Portugal’s main threat came from midfield.

Bruno Fernandes constantly tried his luck from long range in the first half, but only once forced Cillessen into a save as the Barcelona goalkeeper turned behind.

Fernandes saw another effort deflected behind by Van Dijk, while Ronaldo was restricted to a shot from outside the box that Cillessen easily gathered before the break.

Koeman reacted at half-time by introducing Quincy Promes, who came off the bench to score against England in midweek, for the ineffective Ryan Babel.

The Netherlands instantly posed a greater threat with Georginio Wijnaldum denied by Rui Patricio, although the offside flag was eventually raised against the Liverpool midfielder.

However, a more open game also gave Portugal’s creators the space they needed to make the breakthrough.

Bernardo Silva opened up the Dutch defence and picked out Guedes, who bravely ignored playing in Ronaldo to drill a low shot past Cillessen himself.

Patricio was quickly called into action to stop Memphis Depay’s downwards header to prevent another comeback.

However, unlike in midweek when Frenkie de Jong dominated the midfield against England, Holland’s latest Barcelona-bound star was unable to seize control the game.

Instead, Koeman went for a more physical approach by sending on Luuk de Jong and it nearly worked, as with his first involvement the PSV Eindhoven striker saw claims for a penalty waved away before heading wide from a corner.

Portugal, though, comfortably held on in the final stages to make amends for losing the Euro 2004 final to Greece on home soil that left a teenage Ronaldo in tears.