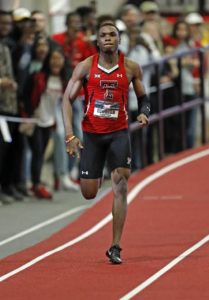 Oduduru, a four-time NCAA champion, was the star attraction for Texas as they won their first NCAA track and field championship last week by  sweeping the men’s 100m and 200m, where he set individual records in both events.
Kittley told www.lubbockonline.com:“I asked agents this weekend — they’re all over the place — what’s he going to be worth?”.
“They started giving me that range. Well, let’s let them bid on him … if he can get $500,000 (a year) (N180m) instead of $300,000. We’ll see.
“I know everybody wants him. He is the hot item right now.
“I am going to encourage him (Oduduru) to turn professional because he has turned down too much money.
“He can tweak his hamstring next year and get nothing. How are you going to turn down $350,000 for five years or $400,000 for five years or $500,000 for five years — two and a half million dollars?
“You can’t do it. Not in our world. Not in the track world. I mean, that’s a lot. He is a sprinter, so he has an opportunity to get some of that bigger money.”

The next major competition on Oduduru’s schedule is the IAAF World Championships scheduled for September 27 to October 6 at Khalifa International Stadium in Doha, Qatar.