Paris Saint-Germain confirmed “three new positive cases” of Covid-19 in their squad on Thursday, a day after Neymar and two teammates were revealed to have contracted the virus, casting serious doubt over the start of their Ligue 1 campaign.

“The latest Sars CoV2 tests carried out on the Paris Saint-Germain playing staff have confirmed that there are three new positive cases,” the French champions said in a tweet, taking the total number of cases in their squad to six.

Three @PSG_English players are confirmed positive after a Sars CoV2 test and have undergone the appropriate health protocols.

All players and staff will continue to be tested over the next few days.

Neymar, Angel Di Maria and Leandro Paredes were the first three to test positive, all after a recent holiday on the Spanish Mediterranean island of Ibiza.

Their identities were confirmed to AFP by a medical source close to the playing staff who requested anonymity for reasons of doctor-patient confidentiality.

Another PSG player, midfielder Ander Herrera, is also known to have been in Ibiza.

PSG are due to play their first game of the new Ligue 1 season away at Lens next Thursday, September 10, but there are increasing doubts as to whether that match will now go ahead.

The Lens game was initially due to go ahead last Saturday, but was controversially postponed to give the PSG squad a break after their run to the Champions League final in Lisbon on August 23, in which they lost 1-0 to Bayern Munich.

That was despite PSG — by far France’s richest club — having played just five competitive games in the preceding six months.

Instead of playing the game, their squad were granted time off but the club has now been left to deal with a cluster of coronavirus cases which raise questions about why the French league decided to postpone PSG’s match in Lens, only for so many of their players to travel abroad on holiday during a pandemic.

PSG are also due to entertain bitter rivals Marseille on September 13, three days after the new date for the Lens match.

The existing, strict French league (LFP) rules stipulate that collective team training sessions must be cancelled if a club has at least four positive tests over an eight-day period, with match postponements possible.

And the six players, who will now be placed in isolation, will not be allowed to even train with their teammates for eight days under the existing health guidelines.

Marseille’s game against Saint-Etienne on August 21, which was set to be the season opener, was postponed because of a cluster of cases. 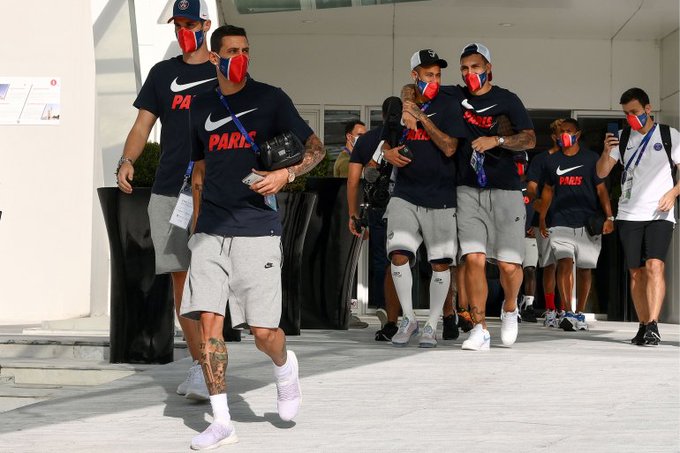 However, the LFP is set to introduce an amended protocol which would ensure teams would be able to play games as long as 20 players — including at least one goalkeeper — provided negative tests.

The last French season was ended early, with 10 rounds of matches left unplayed, because of the health crisis, although PSG were named champions as they led the league at the time.