Rules are rules and must be obeyed no matter what.  That appears to be the stand of Ligue 1 giants PSG as they handed Kylian Mbappe a £153,000 fine (N73.4million) after the Frenchman arrived late to a team meeting, according to AS.

The penalty relates to a meeting held before the Ligue 1 home clash with Marseille on October 28, where Mbappe and Adrien Rabiot were deemed to be in breach of club conduct.

Mbappe has signed a written document to acknowledge his wrongdoing, with the funds being sent directly to the PSG foundation.

Real Madrid are playing close attention to the situation, knowing that any disagreement would increase the likelihood of the striker making a move to the Bernabeu. Mbappe however has not reacted in any form to indicate that penalty is that painful preferring instead to see it as one of those things.

So buoyed by succeeding in bringing back Zidane, club president Florentino Perez was uncharacteristically forthright about the club’s possible pursuit of Mbappe 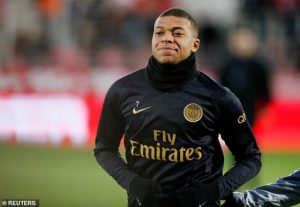 Asked if signing Mbappe will  now became easier because he had Zinedine Zidane at the helm he joked with reporters on Monday night: ‘Zidane is French he can maybe do something’.

And asked if he preferred Mbappe or Neymar he said: ‘I would say both’.

Madrid know that their chances of getting Mbappe – the jewel in PSG’s crown – are very slim and that Neymar will cost the same 222m euros (£190m) he cost PSG two seasons ago.