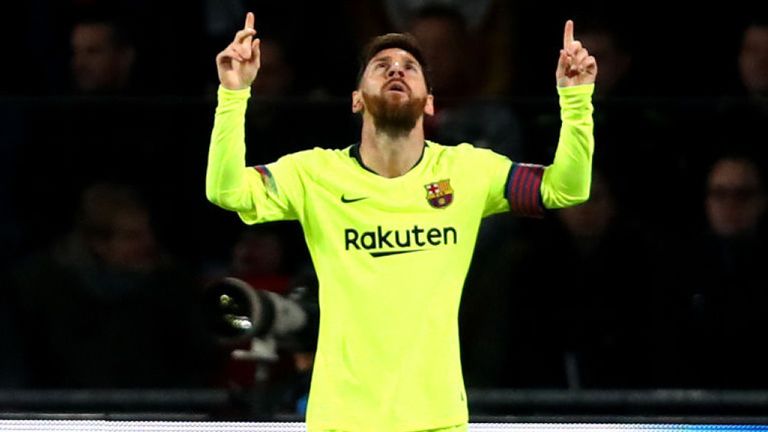 Lionel Messi scored an excellent individual goal and laid on another as Barcelona beat PSV Eindhoven 2-1 to secure top spot in Group B of the Champions League on Wednesday.

Messi provided an assist for defender Gerard Pique to score the second for the Spanish side, who have 13 points from their five matches and an unassailable lead at the top of the pool. PSV will finish bottom.

Captain Luuk de Jong scored a late consolation for the home side as they matched Barcelona for much of the contest at the Philips Stadion, striking the woodwork three times in the first half alone and missing a number of other chances.

In a bright start, PSV forward Gaston Pereiro latched onto a poor pass from Ivan Rakitic but his low drive came back off the post, and minutes later he shot over the crossbar from five yards.

PSV had some good fortune, too, though, as Barca had two efforts cleared off the line within the space of a minute, with Arturo Vidal the unlucky player on both occasions.

His hooked effort from 12 yards was cleared by Pablo Rosario before Angelino blocked the Chilean’s goal-bound header from the resulting corner.

It was Barcelona thanking their lucky stars just before halftime, though, when De Jong’s header from a free-kick came off the crossbar and the follow-up from close-range by Denzel Dumfries struck the post.

The visitors took the lead just past the hour mark, thanks to a typical piece of Messi magic as he picked up the ball on the edge of the box and, with four defenders around him, managed to drive forward and provide a thunderous finish.

It was 2-0 with 20 minutes remaining when the Argentine’s free kick was guided into the PSV net by an unmarked Pique.

De Jong set up a frenetic finish with his headed goal but Barcelona were able to hold on under heavy home pressure.