An Australian newspaper on Monday published a caricature of the tennis star having a temper tantrum at the U.S. Open tennis tournament.

The cartoon has been condemned as racist by civil rights leaders, celebrities and fans.

She was also depicted as having a wild plume of curly hair rising from the top of her head as she stomped on her tennis racket. 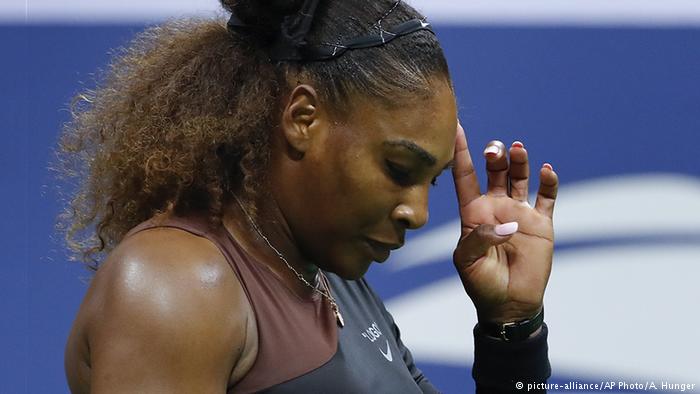 “This despicable cartoon tried and failed to diminish the greatness & grace of @serenawilliams. Racism in any form is unacceptable,” civil rights activist Rev. Jesse Jackson tweeted on Monday.

The cartoon was intended as a lampoon of the tennis star’s angry exchanges with chair umpire Carlos Ramos at the U.S. Women’s Singles final in New York on Saturday.

Williams clashed with Ramos over penalties she thought she did not deserve and ultimately lost to Naomi Osaka, a 20-year-old player born in Japan.

Knight’s portrayal of Osaka as blond and light-skinned also drew criticism for being racist.

The Herald Sun reported on Tuesday that Knight had been mentioned on Twitter nearly 74,000 times following the cartoon’s publication.

The Herald Sun, owned by a News Corp subsidiary, published a defence of its cartoonist on the home page of its website, quoting Knight as saying:

“The cartoon about Serena is about her poor behaviour on the day, not about race.”

Williams was fined $17,000 for three code violations during the controversial match, including breaking a racket and verbally abusing the umpire.

She did not stomp on her racket during the match as the cartoon portrayed.

The National Association of Black Journalists said the cartoon was “repugnant on many levels.”

“The Sept 10 cartoon not only exudes racist, sexist caricatures of both women, but Williams’ depiction is unnecessarily sambo-like,” the association said in a statement.

“Sambo,” a derogatory term for a black person, is the name of a folkloric figure usually depicted with an exaggerated mouth and an ape-like stance.

Some Twitter users, however, contested that the image was not racist.

Lynne Adams tweeted on Tuesday, “Serena Williams is a large black woman who had a complete meltdown, what is racist about this cartoon.”

After the match, Twitter users and tennis commentators alike said the penalties assessed to Williams were excessively harsh, and some said they may have reflected sexism and racism in tennis officiating.

Williams said that male players were held to a lower standard for court conduct.

“I’m here fighting for women’s rights and women’s equality,” Williams said at a news conference after the match