Ighalo in a businesslike approach, converted a penalty  in the 24th minute of the match, a strike which jolted the hosts and left no one in doubt it was going to be a bad day for the home fans who had turned up to cheer their side to victory.

Du Wei however responded just nine minutes later to put the scoreline at par.  Ighalo’s teammate Tan Long increased the tally after a timely assist from Zhang Xiaofei in the 35th minute. Three minutes later the Nigerian was again on target as the visitors held on to their lead till the end of the first half.

The homers who came out smoking on return for the second half grabbed a second goal in the 60th minute thanks to Wang Fan even as they piled up pressure in search of equaliser that will ensure they claim a point instead of kissing goodbye to three points.

Both teams cautiously maintained their positions with the homers nursing hope of cancelling the lead at some point, but it was not to be as Ighalo compounded their woes in the 86th minute with his third goal of the day and followed up with a fourth goal in the three minutes of added time, to finally put paid to the ambition of their disappointed opponents.

Despite the victory however, Ighalo’s Changchun Yatai remain in the 13th position on the log with eight points in six matches.

The Chen Jingang tutored side has not been able to record impressive results in about six outings so far.  Saturday’s victory actually marks the second in six outings.  The side had gone into Saturday’s match fresh from a 3-0 home victory over  Henan Jianye, but  only recently suffered a 5-0 defeat in the hands of Guangzhou Evergrande.

But with back to back victory which produced eight goals fans of the side believe there will be more reasons to smile. 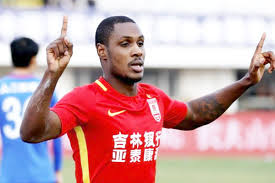 Ighalo who joined the Chinese Super League side on 31 January 2017, Ighalo joined Chinese Super League club Changchun Yatai for a reported £20 million has so far netted over 16 goals for the side in over 30 appearances.  The former Watford star who is among players being tipped to shine for the Eagles at the World cup in Russia is on top of his game a scenario which will no doubt gladden the heart of Super Eagles coach Gernot Rohr.