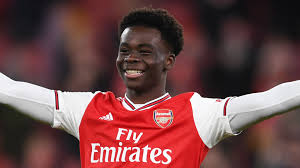 Don Balon claim Real are watching the 18-year-old’s contract situation very closely and if he fails to pen a new deal the LaLiga giants are willing to put €30m on the table.

Arsenal though are reportedly confident of tying Saka down to a new long-term contract after his breakthrough into the first team this season.

According to Football.london Saka has not yet penned a new deal with Arsenal, but Mikel Arteta’s side are confident the youngster, whose deal expires next summer, will commit his long-term future to the Gunners.