Indications that the second coming of Zinedine Zidane may not be tea party all the way emerged Monday after a number of Real Madrid fans lashed out at the  46 year old world cup winner for appearing at his unveiling wearing what they dubbed “criminal” trousers.

The fans were not amused at all as many took to the social media mock his choice of jeans.

The Frenchman was being presented as Real boss for the second time, making a return to the job he left 10 months ago

Zidane opted for some extremely tight denim, rolled up from the inside out above his bare ankles.

Fans could make peace with the jacket, shirt and trainers which were all relatively inoffensive. 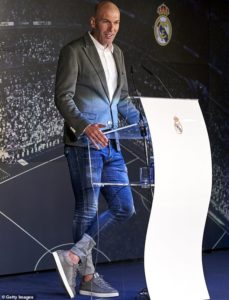 But the jeans below came in for plenty of flak online as the former midfielder returned to the Bernabeu after 283 days away.

One supporter wrote: ‘Zidane was an absolute God in my eyes growing up. Could do no wrong. ‘The big man has just destroyed his legacy with one pair of jeans. Tragic.’

Another joked: ‘Gardai investigating the crime at Mr Zidane’s house say that the thieves stole everything including the contents of the family washing machine, leaving only his wife’s jeans which he wore to the station to make the complaint.

Another fan again said “Criminal offence for a lad to wear jeans with no socks even if it is Zidane” It did not stop at that as another added ” When you gonna ask Zidane for your jeans back, its gonna take you ages to iron the creases from those turn ups out”

The Real boss may take a bit of a ribbing from some of the players but no doubt they’ll be pleased to see him back after a poor season since he departed last summer.