Manchester City striker, Sergio Aguero has resumed training with the Argentina National Team ahead of the FIFA World Cup. 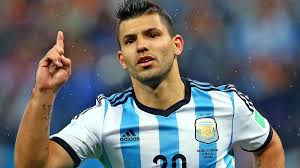 Aguero missed the final matches of Coach Pep Guardiola side after going under the knife few weeks ago.

He was however included in the provisional list released by Argentina coach Jorge Sampaoli.

According to Argentina Football Association (AFA), Aguero will be in shape for the Mundial.

Aguero’s recovery has been an issue lately but his comeback appears to be on time and all the signs point that he will be ready for the opening game against Iceland.

Argentina is in Group D alongside Nigeria, Iceland and Croatia with the two top teams advancing to the second round of the championship in Russia.

Nwakali brothers, Omoyele, Eduok, 19 others called up for Atletico friendly

It is my time-  declares Mixed Martial Artist Usman