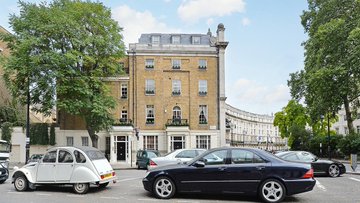 Mr. Giggs, 45, one of the most decorated soccer players of all time who played 24 seasons with Manchester United, bought the underlying property in 2004 for £1.94 million, according to records filed with the Land Registry, and immediately set to work planning his dream home.

He went to some pains to build the lavish, five-bedroom, raising the ire of his neighbors when he submitted plans with the local authority to tear down the old Victorian estate known as Silver How and replace it with a clunky brick and faux timber-frame mansion, local media reported at the time.

His plans were eventually approved in spite of the grousing residents of Chatsworth Road, and Mr. Giggs built a sprawling 6,700-square-foot house with a double garage and indoor swimming pool.

Images of the home have revealed the soccer star’s taste for the dramatic, including a glossy black “bat cave”-like kitchen and similarly dark bar and lounge.

His taste for the gothic extends to eggplant-colored velvet upholstery, chandeliers and dark-stained hardwood floors.

The property hit the market this week with real estate agents Briscombe, Nutter and Staff, which did not return a request for comment.

read also:Ferdinand reveals what he said to Giggs, Scholes about Messi

Mr. Giggs, now coach of the Welsh national team, also could not immediately be reached for comment.