Jürgen Klopp said he was blown away by the brilliance of Mohamed Salah’s strike against Chelsea as Liverpool ended the game 2-1 to produce a flawless finish to the Premier League title race. 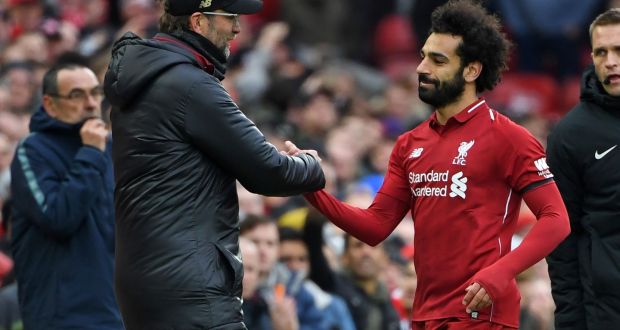 Salah struck an astounding goal 142 seconds after Sadio Mané opened the scoring at Anfield as Liverpool retook a two-point lead over Manchester City with victory against Maurizio Sarri’s side.

Klopp was thrilled by what he described as a complete team performance and the build-up to Mané’s 13th goal in 16 games, but it was the Egypt international’s emphatic finish past Kepa Arrizabalaga that left him momentarily speechless.

“It blew me away,” the Liverpool manager said. “I didn’t think anything in that moment but I know I was really happy because I was in line with the ball and maybe I saw first that it would go in! It was a really outstanding finish and I don’t want to minimise that but I loved the first goal, too. I was immediately reminded of the 4-3 against Borussia Dortmund. Hendo instead of Milly and Sadio instead of Dejan, but good team play, good cross, good header. The performance was really good but you need the goals, and we got them.”

Salah now has 19 league goals for the season, 22 in total, but had been on a barren run by his standards of one goal in 10 games before sealing victory against his former club. Klopp said of the drought:

“The answer in football is always work rate, and the work rate of all three up front today was outstanding. Chelsea is a top team. We treat these games like Champions League games, nothing else, and you cannot defend a team like this without offensive wingers. Everybody uses it. Each top team takes that risk. How the boys worked today was unbelievable. And they got the reward. You can get an easy goal from a yard or a shot from 25 yards, a thunderbolt. Outstanding.”

Liverpool are now only four wins from their first league title since 1990 should City slip up in any of their remaining five matches. Klopp insists the focus is on finishing the season with 97 points and not on what Pep Guardiola’s team produce.

Ahead AFCON 2019: Chukwueze, Osimhen ready to fight for Eagles shirt after scoring

Pogba sends warning to Barcelona ahead of Champions League showdown