Cameroon international Samuel Eto’o has signed for Qatari side Qatar Sports Club, the 13th club he will be playing for in his long soccer career spanning over 26 years 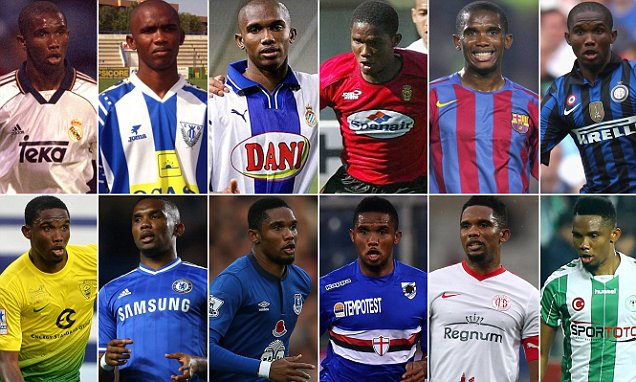 The former Barcelona, Inter Milan and Chelsea striker is set to be unveiled any moment from now it was confirmed on Tuesday as he becomes the latest big-name to head for  Qatar’s domestic league as it gears up to host the 2022 World Cup.

The club said on social media that it would ‘present the international star Samuel Eto’o’ at a press conference. It is understood he underwent a medical earlier in the day.

The four-time African player of the year will join former team-mates in Qatar, including ex-Barcelona midfielder Xavi, who plays for Al Sadd, and Wesley Sneijder who was at Inter.

In 2009, Eto’o won the Champions League with Barcelona playing alongside Xavi.

A year later he won the same trophy with Inter in the same team as Sneijder.

The signing is a coup for Qatar Sports Club, who finished in mid-table last season and currently have little hope of winning any domestic titles.

Earlier on Monday, Eto’o said Ligue 1 clubs had contacted him after he announced he was leaving Turkey last week.

The 37-year-old is now in the twilight of a fabulous career.

He enjoyed five hugely successful seasons with Barcelona from 2004 to 2009, before helping Jose Mourinho’s Inter side win the treble of Champions League, Serie A and Coppa Italia titles in his first season in Italy.

He then had brief stints at Chelsea and Everton in the Premier League.

Eto’o also scored 56 times for his country in 118 appearances and won two AFCON cups with Cameroon in 2000 and 2002 respectively.

The club via its verified twitter [email protected], declared;

“The management of Qatar Football Club is pleased to invite you to attend the press conference to present the international star Samuel Eto’o, which will be held on Tuesday at 8:00 pm at the Club