Senate President Bukola Saraki has returned to Russia and will be in the stands to cheer the Super Eagles of Nigeria to victory against Argentina in a crucial group D clash on Tuesday night, according to a statement issued by the Nigeria Football Federation. 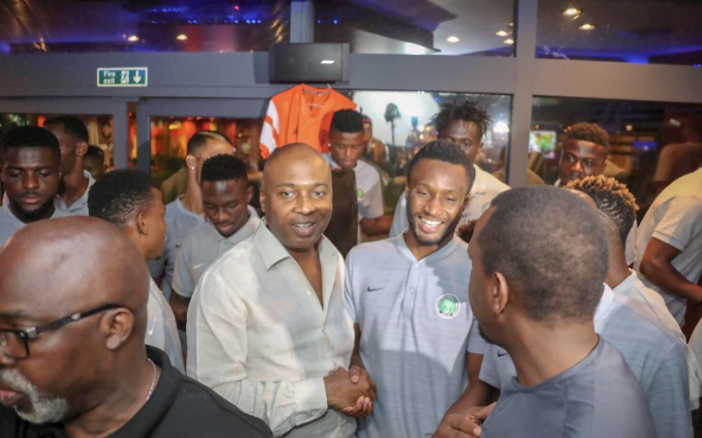 The number three citizen should arrive the East European nation before Tuesday’s encounter after attending the National Convention of the All Peoples Congress at the weekend in Abuja.

He was at the Volgograd Arena to watch as Nigeria defeated Iceland 2-0 on Friday and flew back the same night  to Nigeria for the APC convention.

Ahead of Tuesday’s decisive encounter Saraki will lead the cheers alongside Ambassador Steve
Davies Ugbah, Youth and Sports Minister Solomon Dalung (who returned to Russia on Monday) Permanent Secretary in the Ministry, Mr. Olusade Adesola, as well as other members of the Nigeria  Government delegation.

“Members of the National Assembly (Senators and House Members), NFF Executive Committee Members, Members  of the NFF Congress and former NFF Presidents and General Secretaries will also be at the match venue,” the NFF said.

Former Nigeria coach Adegboye Onigbinde, directors in the Youth and Sports Ministry, Alhaji Abba Yola,
Mr. Mainasara Illo, delegations from different States and other stakeholders including NPFL club owners
are among those who will also cheer the Super Eagles live.

A win for Nigeria will give them six points to set up a potential round of 16 clash against France or Denmark.

Eagles may face France, Denmark in Round of 16

Pique: I’ll retire rather than be Barcelona reserve

Pique: I’ll retire rather than be Barcelona reserve