Serena Williams has accused tennis doping authorities of ‘discrimination’ after she faced a random drugs test.

The 36-year-old, who has enjoyed a remarkable tennis come back since the birth of Alexis Olympia, raged on social media that it had been proven that she is tested more than other players by US Anti Doping. 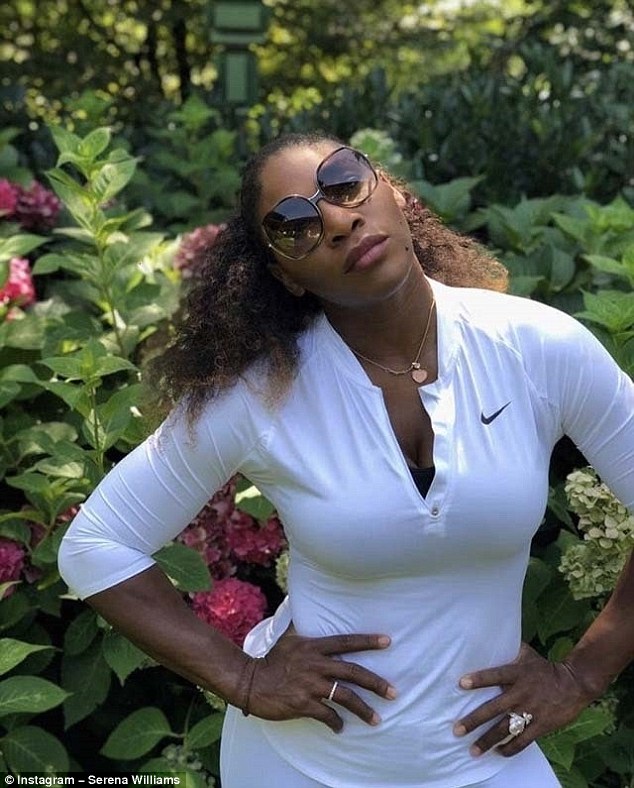 Serena, who reached the final of Wimbledon two weeks ago, said the only consolation from the regular testing was that she was ‘helping to keep the sport clean.’

The star, who is married to multi-millionaire tech mogul Alexis Ohanian, wrote: ‘…and it’s that time of the day to get “randomly” drug tested and only test Serena.

‘Out of all the players it’s been proven I’m the one getting tested the most. Discrimination? I think so. At least I’ll be keeping the sport clean #StayPositive’

Earlier this month, Serena told reporters at Wimbledon she does not care how often she is drug tested as long as other players are treated in the same way.

The seven-time champion reiterated her claim that she undergoes more checks for doping than anyone else on the circuit.

She explained that he arrived 12 hours ahead of her allotted daily ‘whereabouts’ hour and that it was among a welter of out-of-competition tests being demanded of her.

Williams said: ‘How is it I’m getting tested five times in June? It’s only June, I’ve been tested five times. I’m OK with that, as long as everyone is being treated equally. That’s all I care about. I despise having people in our sport that aren’t being honest.

‘I’m totally OK with testing and I encourage it. What I want to know is that everyone is getting tested, that we are really working to keep this sport clean.

‘I feel like its equality, that’s all I’ve been preaching, it’s all about equality. If that’s testing everyone five times, let’s do it. Let’s be a part of it.

‘I never knew that I was tested so much more than everyone else. I didn’t realise it was such a discrepancy, at least with the American players, both male and female.

It feels good to be back–Ndidi