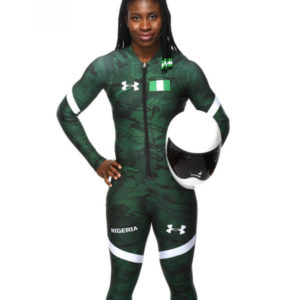 Nigeria’s Simidele Adeagbo, Africa’s first female Skeleton athlete at a Winter Olympics is for another milestone in her illustrious career.
The 37 year-old will become the first Nigerian to compete at the International Bobsleigh & Skeleton Federation (IBSF) Skeleton International Cup at the Utah Olympic Park, Utah, USA on Saturday.
At the 2018 PyeongChang Winter Games, Simidele became the first African woman to compete in the skeleton event and also became the first Nigerian to compete at the Winter Olympics .
Simidele tweeted on Thursday: “Ready to make history as the 1st Nigerian to compete in an @ibsfsliding Intercontinental Cup race! I’ll be competing with some of the world’s best! So proud to be representing Team Nigeria and continue to break barriers!”
Simidele, who is based in South Africa, picked up the Skeleton in 2017 and is a former triple jumper.
The IBSF Intercontinental Cup (ICC) is a skeleton-only race series and can be seen as step between the North American Cup and European Cup series and the top-class BMW IBSF World Cup.