Manchester United’s team bus was checked by sniffer dogs before making their way to Anfield.

Ole Gunnar Solskjaer’s side travel to the table-toppers hoping to maintain their unbeaten record against the top four sides this season. 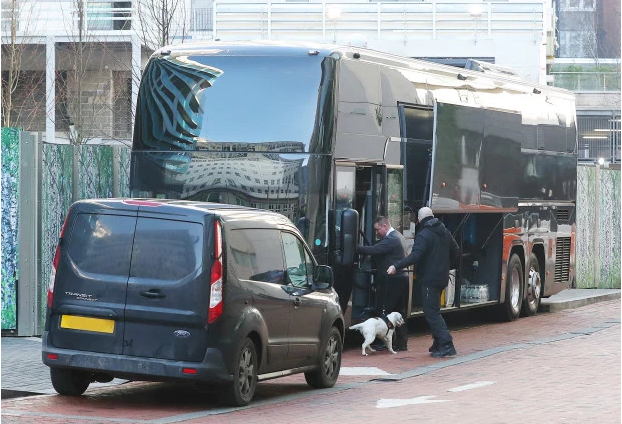 But their first battle will be arriving at Anfield after a number of security issues were raised.

A Kop supporters’ social media site with 77,000 followers has been promoting what they call a “coach greeting” for the bus as it approaches the stadium.

It is telling fans to “let them know we mean business” by lining the streets before the 4.30pm kick-off.

The posting is a sinister reminder of the treatment suffered by Manchester City before their Champions League quarter-final first leg in April 2018.

The City coach was lead through a corridor of hatred with fans breaking the coach windows as it was hit with beer bottles, cans and flares.

The roof of the coach was burned with a flare that was thrown at the bus and the vehicle was rendered unfit for use afterwards.

And just to remain on the cautious side, dogs were deployed to sniff the inside of the coach around the baggage area while it was parked outside The Lowry Hotel.

The trip to Anfield will take just under an hour with the Red Devils expected to arrive around two hours before kick-off.

“Of course they want to try to intimidate us but as long as it’s within the boundaries.

“I’ve been sat in a coach or bus going to Europe or to Anfield and whatever they shout and scream you don’t really notice, that’s just part and parcel of these games.”