Two Southampton supporters may be banned for making fun of Cardiff City following the death of striker Emiliano Sala. 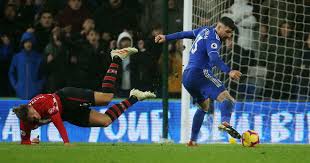 Sala whose body was discovered last Thursday died in a plane crash last month while flying to Wales from Nantes in France..

The fans were pictured making Aeroplane gestures during their side’s 2-1 home Premier League defeat by Cardiff on Saturday.

“Southampton Football Club can confirm that two fans were detained and had their details taken by police during our match against Cardiff City,” the club said in a statement.

“Such behaviour has no place in our game and will not be tolerated at St Mary’s.” 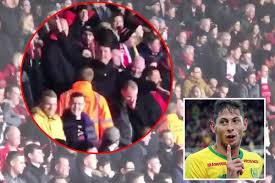 Southampton have said they would work with Hampshire police to identify individuals who made the indecent gestures.

“The club will be taking an extremely firm stance against anyone involved and intends to ban those supporters identified,” they added.

The behaviour of the fans was slammed on social media.

@NevilleSouthall…They are not Southampton fans. I think every other fan there would disown them
They are scumbags

@WilliamEsler
Seriously what is wrong with people? Southampton fans making aeroplane gestures towards the Cardiff fans today? What goes through your head to do that? #Saints #CCFC #CardiffFooty Accumulators