After the match finished 1-1 thanks to Denis Zakaria’s own goal and Xherdan Shaqiri’s equaliser, Switzerland held on to force penalties despite Remo Freuler’s harsh-looking red card in the 77th minute.

Spain goalkeeper Unai Simon was the hero, saving spot-kicks from Fabian Schar and Manuel Akanji, before FC Augsburg winger Vargas blazed over the crossbar, giving Mikel Oyarzabal the chance to win it 3-1 on penalties, which he duly did.

Vargas, just 22, was visibly, tearfully emotional at the final whistle, and Liverpool midfielder Thiago showed his empathy by embracing him closely and sharing some encouraging words. 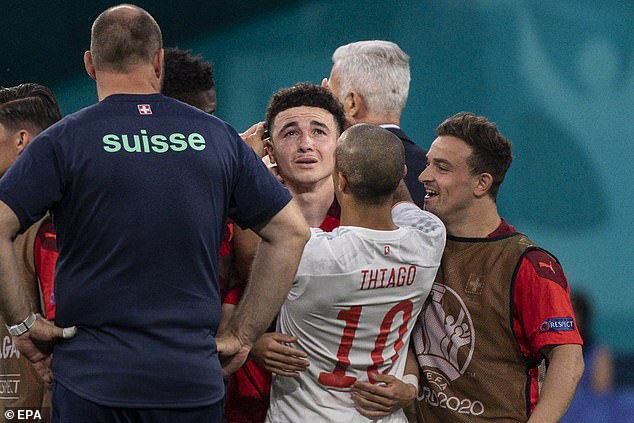 His Reds team-mate Shaqiri then hugged him in appreciation of his kind gesture.

Read Also: Spain survive Swiss scare to book Euro 2020 semi-final spot
The result means Vladimir Petkovic’s side miss out on reaching the last four of a major tournament for the first time in their history.

Spain, on the other hand, reach the semi-final of the European Championship for the third time across the last four tournaments.

They will face Roberto Mancini’s Italy on Tuesday July 6 after the Azzurri edged past Belgium 2-1 in a thrilling game on Friday evening.