Story of Tyson and his three wives

... including the one he caught having sex with Brad Pitt, one who’s a doctor and ex-con spouse Kiki

Boxing legend, Mike Tyson, is the most settled he’s ever been.And that could be because of the influence of his new wife, Lakiha Spicer. 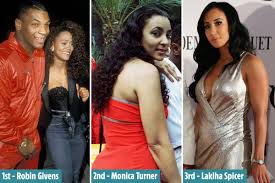 Or it’s possible that the 53-year-old’s admitted cannabis indulgence has mellowed him out.

But over the years his tumultuous lifestyle hasn’t lent well to being a married man.

Before he walked down the aisle with Lakiha, better known as ‘Kiki’, he was wed twice.

First, to American model Robin Givens in 1988, who he caught in bed with Hollywood A-lister Brad Pitt.

Then, to doctor Monica Turner for six years.

ROBIN GIVENS, 1988-89
The most explosive love affair Mike had came at the height of his fame. 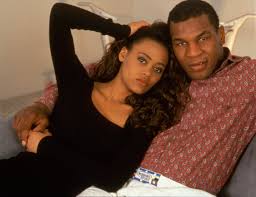 They married 11 months after their first date, on which they were reportedly joined by her mother and publicist.

“My social skills consisted of putting a guy in a coma,” he wrote in his memoir, ‘Undisputed Truth’.

“So maybe Robin was just what the doctor ordered.”

According to Tyson, they had a hastily arranged wedding when Givens announced she was pregnant.

He had already given Givens and her mum £3million to buy a New Jersey estate, as well as put £6.5million in another account for her and her mum.

But shortly after money was exchanged, Robin told Mike she had had a miscarriage.

The pair later appeared in cringe-worthy interview with US journalist Barbara Walters, where Givens called Tyson “intimidating” and said her and her mother were frightened of his temper.

Givens filed for divorce soon after the interview, but they continued to see each other.

At that point, Givens began dating Brad Pitt – and Tyson walked in on the pair having sex.

“You had to see the look on his face,” Tyson wrote in his book.

“He looked like he was ready to receive his last rites. He also looked stoned out of his gourd.”

MONICA TURNER, 1997-2003
You could’ve forgiven Tyson for swearing off marriage after his experience with Givens. 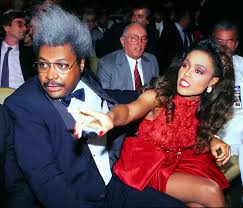 But in 1997 he said ‘I do’ to Turner in a quiet Muslim ceremony, seven years after they first met.

Their paths first crossed in 1990 at a party thrown by comedian Eddie Murphy.

The pair stayed in touch, even when Tyson was convicted of raping 18-year-old beauty pageant contestant Desiree Washington and sent to an Indiana jail for three years.

Every two weeks Turner visited Tyson in prison as their romance blossomed.

When he was released they set up home in Maryland, where they had hoped to live the quiet life.

But their romance wasn’t to last – with Turner filing for divorce and claiming adultery four years later.

They have two children together – Rayna and Amir.

LAKIHA SPICER, 2009-PRESENT
Kiki, 43, first met Tyson aged 18, when they were introduced by promoter Don King after one of his bouts. 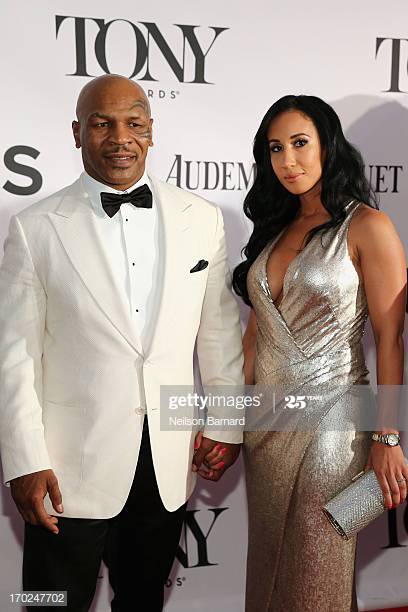 However, it wasn’t until the early noughties that they began dating, and they married in 2009 – two weeks after the death of Tyson’s daughter, Exodus.

But, despite the longevity of their marriage, it’s been fraught with difficulties and suggestions of infidelity.

Tyson said back in January that he had only been faithful to Spicer for the last two years of their marriage in an interview on rapper T.I.’s ExpediTIously podcast.

Kiki has also had her problems with the law.

In 2008, she was sentenced to six months in federal jail for defrauding £60,000 from a company owned by her father.

She claimed she taught maths courses in the Sister Clara Muhammad School, however she allegedly used the school to launder money.

Kiki did time while carrying Tyson’s baby, and when she came out she found her husband hopelessly addicted to drugs.

read also:Iron Mike Tyson to make shock return to the boxing ring at 53

With her help, Tyson managed to beat his addiction.

“I’m very happy me and my wife got together, because I don’t know how I would have survived out there”, he told US magazine People.