Sunusi, Ali close gap on Mfon Udoh in the race for the NPFL gong

The race for the highest scorer at the end of the Nigeria Professional Football League is gathering momentum after Rabiu Ali and Ibrahim Sunusi closed up the gap between them and current leading scorer, Mfon Udoh who has eight goals to just a goal in the goal scorer chart. 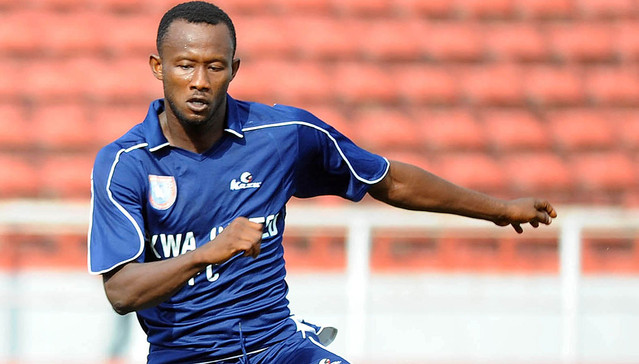 Kano Pillars’ Ali had the opportunity to draw level on the same number of goals with Udoh but he spurned the opportunity after he could only convert one out of the two penalty kicks his team was awarded against Gombe United at the Sani Abacha Stadium, Kano today.

Ali’s first spot kick in the 15th minute was saved by Adewale Adeyinka in goal for the Desert Scorpions but he was unable to stop the striker’s effort in the injury time of the first half for his seventh goal of the season.

Sunusi and his Nasarawa United team were in destruction mood against the second placed El Kanemi Warriors at the Lafia Stadium today after he fired two goals to record his seventh goal of the season.

Anas Yusuf’s double and Ndala Isah wonder free kick made it an empthatic 5-1 win with Sulley Mohammed’s effort in the 65th minute for the Borno Army amounting to a consolation goal.

Udoh fired blanks in Jos when Akwa United visited Plateau United who thrashed them 3-0 to ensure that didn’t lose to the NPFL Group B pacesetters after they had held the Promise Keepers to a 2-2 draw in the reverse fixture in Uyo earlier in the season.

Akwa United, El Kanemi, FCIU remain in charge in NPFL Group B despite massive away losses

Solskjaer in search of derby revival after Everton embarrass United