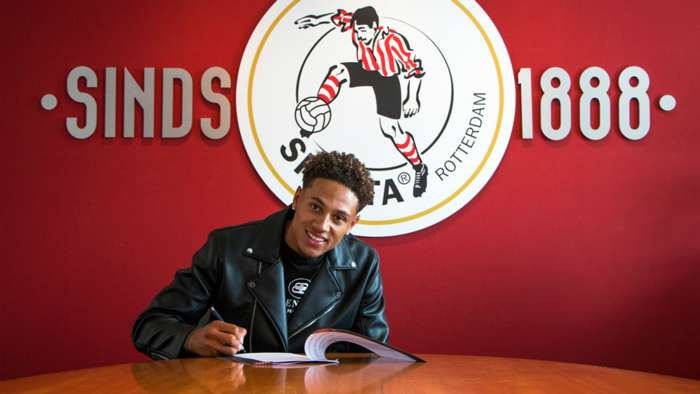 The young stopper, who began his career at Bayer Leverkusen, completed the move with the Castle Lords with the option for another two years.

At Sparta, the youngster will be hoping to continue his growth under manager Henk Fraser.

“The twenty-year-old goalkeeper comes over from Fortuna Dusseldorf on a free transfer and signs for two seasons, with an option for another two years,” a club statement announcing his arrival read.

“Okoye, who holds both a German and Nigerian passport, made his debut for the Nigerian national team in November 2019, in a friendly match against Brazil.”

Reacting to the move, former Sparta Rotterdam midfielder Henk van Stee, who is now the team’s Director of Football, claimed Okoye can add value to the club.

“With Maduka we bring in a great talent who has a lot of potentials,” Van Stee said.

“He attracted the interest of several clubs from different countries, but he believes he can take the next step at Sparta.

“We believe he can be of value to this club and are happy that he signed here.”

Meanwhile, the youngster has expressed his delight with the move while revealing his readiness for the “big stage”.

“I am very happy to join this club, Sparta Rotterdam,” he told Omasports.

“It’s a good opportunity to take my career to the next level. Now I am ready for the big stage.”

Born in Germany to a Nigerian father and a German mother, Okoye pledged his international allegiance to Nigeria.

He made his international bow in the Super Eagles’ 1-1 draw against Brazil on October 13, 2019 – coming in for Francis Uzoho in the 63rd minute.

Maradona to drag Netflix to court over Hand of God film