Super Falcons and the Women’s World Cup: Can they raise the bar in France?

To submit that the Super Falcons of Nigeria have proved to be a formidable force in the women football in Africa is to put it mildly. They have done this, not by blowing their trumpet or boasting at press conferences but by proving it on the pitch.

Winning the African Women Championship (AWC) now known as African Women Cup of Nations a record 11 times is indeed no mean feat.  The Falcons clinched the very first edition in 1991 and practically colonised it so to say from then on till the 2008 edition when they chain was broken with Equatorial Guinea hosting and winning that edition.

The falcons again returned at the next edition in South Africa to continue from where they stopped with yet another one edition break for Equatorial Guinea in 2012 before resuming their back to back victories to 2018 edition in Ghana leading to the 2019 World cup which kicks off in France today.

So when it comes to the African Women Nations cup, it will be safe to say that the Falcons have the master key or better put the winning formular.

However it is has remained a herculean task for the Nigerian ladies to replicate their super form and super achievement on the continent at the world stage. It was not surprising that Nigeria was present at the maiden edition of the FIFA women’s world cup in 1991 in China.

Perhaps it will be safe to say that making a debut at the world stage in 1991 was more important really than surviving the group stage and rubbing shoulders with eventual winners of the that edition, USA, finalists Norway and other countries like China, Germany among others who have since proved to be formidable in women soccer.

But having made a record seven appearances at the World cup it is reasonable to say that the Falcons have picked enough experience, haven played against some of the best teams, and as such ought to have reached a level where they can hold their own against these regular opponents.

The best performance the team has posted was at the 1999 edition in USA where the Falcons made it all the way to the Quarterfinals before losing out to Brazil.

In that memorable edition Sissi of Brazil and Sun Wen of China won the Golden Shoe award for scoring seven goals. In total, 123 goals were scored by 74 different players including five of the best legs in Nigerian squad, Nkiru Okesieme, Mercy Akide,Nkechi Egbe, Prisca Emeafu and Rita Nwadike.

Shortly after that outing however the Nation returned to what could pass for her customary group stage exit, and has exited the world cup six times at the group stage. 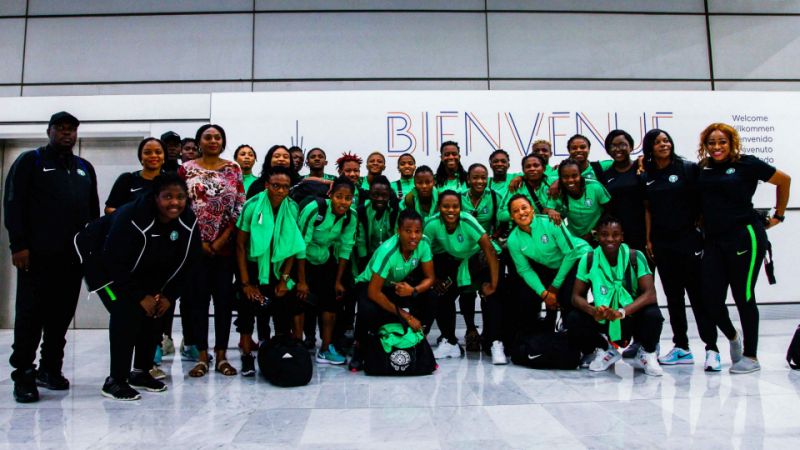 Today at 8pm, the Falcons will be on the march again! Looking to a better outing at they face Norway in their opening match at the Stade Auguste-Delaune in Reims, France.

Interestingly the Football Federation has reportedly settled the girls allowances leading to the today’s kickoff thus avoiding what would have been a major distraction.

With the likes of three time African footballer of the year Assisat Oshoala, France based Desire Oparanozie, Francisca Ordega, Norway based Rasheedat Ajibade, Rita Chikwelu, Onome Ebi to mention but a few in top shape, coupled with current form of goalkeeper Tochukwu Oluehi one could say that the Falcons can on a good day rise to the occasion.

The big questions are; can the Falcons rise above the group stage exit ritual?

Can the team replicate the 1999 achievement?  Or can the team indeed raise the bar by booking a place in the semis?

The rhythm is on, now let the dance begin!