The 28-year-old is currently appealing against a decision by the Court of Arbitration for Sport which approved the IAAF’s introduction of a new testosterone limit for female athletes.

Semenya is unable to defend her 800m world title in Doha later this month without taking hormone-suppressing drugs, something she has refused to do.

At the time of CAS’ ruling, Semenya said: ‘I am very disappointed to be kept from defending my hard-earned title.’

She would have needed to take medication to comply with the IAAF’s rules on athletes with differences of sexual development.

And the South African has started training with Gauteng-based women’s football club JVW with a view to making her debut next season as the transfer window is currently closed. 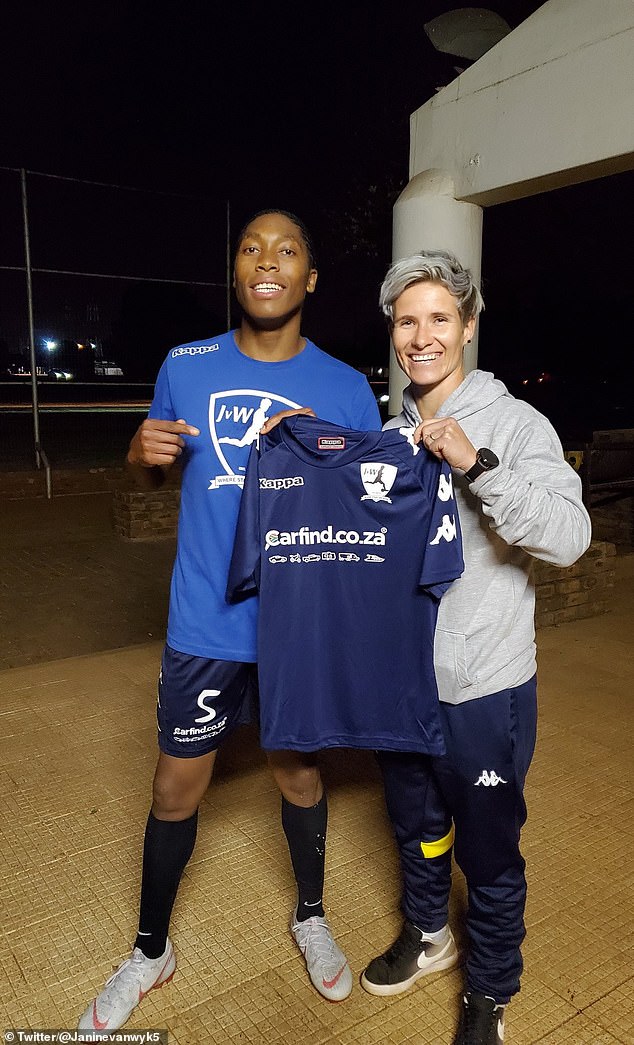 ‘I am grateful for this opportunity and I appreciate the love and support I already get from the team,’ she told the club’s website.

‘I am looking forward to this new journey, and hopefully, I can contribute as much as I can to the club.’

Club founder and South Africa Captain Janine Van Wyk said: ‘I am absolutely honoured that out of all the other women’s clubs around the world, she has chosen JVW as the club where she would like to start showcasing her football skills.

‘I welcomed her at her first training (session) with the team on Tuesday and was impressed to see that she definitely has all the fundamentals.’

JVW compete at the highest level of women’s football in South Africa, the Sasol League. In 2016, the club enjoyed a record-breaking season, defeating the likes of Mamelodi Sundowns, Palace Super Falcons and Croesus Ladies for the first time since the club’s inception.

That season they won the Gauteng Sasol League, defeating TUKS Ladies 6-0 in the Provincial Playoff final.

Some, however, say Semenya who married her long-term partner, Violet Raseboya, in December 2015 can only play club football ruling out the possibility of her being invited to the national female team as that will re-open the unending debate over her gender.