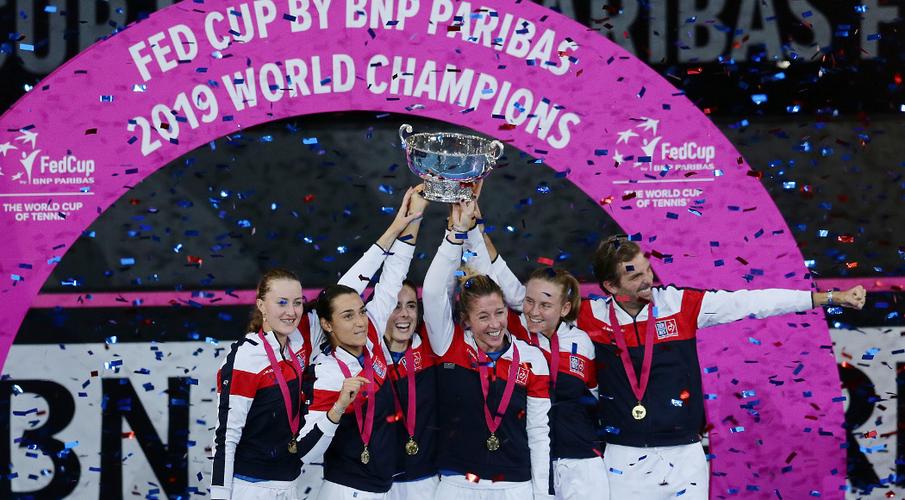 In the last tournament played under the current format, the pair kept their focus at Perth Arena to overcome Ashleigh Barty and Samantha Stosur 6-4, 6-3, denying the home team their first crown in 45 years.

It was France’s third title and first since they beat the United States 16 years ago, piling more misery on seven-time champions Australia who have now lost all nine of the last Fed Cup finals they have appeared in.

Mladenovic and Garcia, who won the 2016 French Open doubles title, bounced back from going an early break down in the first set to expose Stosur’s weaknesses, with the veteran out-of-sorts and making too many mistakes.

World No 1 Barty, stunned by Mladenovic in a singles rubber earlier on Sunday, did her best to keep Australia in the hunt, but the French pair were clinical, racing to victory as their teammates went wild.

“I’m the proudest man on the planet right now, I’m so proud of my girls and my team. They deserve it because they fought for a long time for this title,” ecstatic France captain Julien Benneteau said.

“For sure I am going to have a lot of beers now.”

“Definitely, it’s lots of emotion to share this with Caroline,” said Mladenovic.

“Three years ago we failed on the last step of the tie. Today we just wanted to take this little revenge for oursleves and it’s not describible how we feel right now.”

The final marked the last Fed Cup played under the current format, with an overhaul next year seeing 12 nations compete in a six-day event in Budapest.

That will mean an end to home ties and the atmosphere they bring, with the 26 951 fans turning up over two days in Perth the second-highest Fed Cup attendance on record after Roland Garros (30 000) in 2005.

The doubles clash was set up by Ajla Tomljanovic hauling the home team back into the tie by beating France’s Pauline Parmentier 6-4, 7-5.

Croatian-born Tomljanovic, in her Fed Cup debut for Australia, had been thrashed 6-1, 6-1 by Mladenovic in the opening singles rubber on Saturday.

But captain Alica Molik kept faith with her and she bounced back to beat Parmentier 6-4, 7-5.

“We gave everything today, we fell just a fraction short. That happens,” said Molik.

Earlier Barty, who has been in scintillating form, whipping Garcia 6-0, 6-0 on Saturday after winning the WTA Finals in China last weekend, crashed in a classic.

“From my point of view I fought as hard as I could and I hope that I did my team proud and all Australians proud. I fought with everything I had left,” said Barty.

Barty started where she left off after the “double bagel” of Garcia on Saturday, breaking Mladenovic’s first service game with a net volley to extend her streak to 15 games this weekend.

But Mladenovic held serve to end the Barty run and it became a closer affair before the Australian began forcing errors to take the first set.Zidane wants Benzema to play for France

Barty saved five break points in the opening game of the second set, but Mladenovic finally worked a first crucial break with some quality passing shots, with a forehand long from Barty giving her a 5-4 lead.

She held her nerve to serve out the set.