Nigeria international Victor Osimhen’s transfer from Lille to Napoli is the most expensive during the just concluded transfer window, Sportinglife.ng reports.

The Super Eagles forward became the most expensive African player of all time after the Italian club smashed their transfer record with a deal worth £73.2m /$94.9m.

According to a list compiled by Bleacher Report, Kai Havertz’s £72m/$93.7m move from Bayer Leverkusen to Chelsea is the second on the list. At 21, Havertz is one of the world’s most promising young talents and Chelsea were delighted to tie him down for his best years with a five-year contract.

Arthur Melo is third on the list with his £66m /$85.6m from Barcelona to Juventus. The 24-year-old Brazilian midfielder moved to Turin after two seasons in Spain in a deal that was completed before the end of the delayed season.

On the fifth position is Ruben Dias with his £62m /$80.4m move from Benfica to Manchester City. The 23-year-old Portuguese centre-back moved to the Etihad Stadium to help shore up City’s backline.

Alvaro Morata’s £59.2m /$76.7m move from Chelsea to Atletico Madrid is sixth on the list. The 27-year-old Spanish striker made his two-year loan move permanent before returning to former club Juventus in another loan deal.

In seventh position is Miralem Pjanic, who joined Barcelona from Juventus in £54.8m /$71m. Part of the agreement that saw Arthur move to Juventus, the 30-year-old Serbian midfielder moved in the opposite direction in a separate deal. 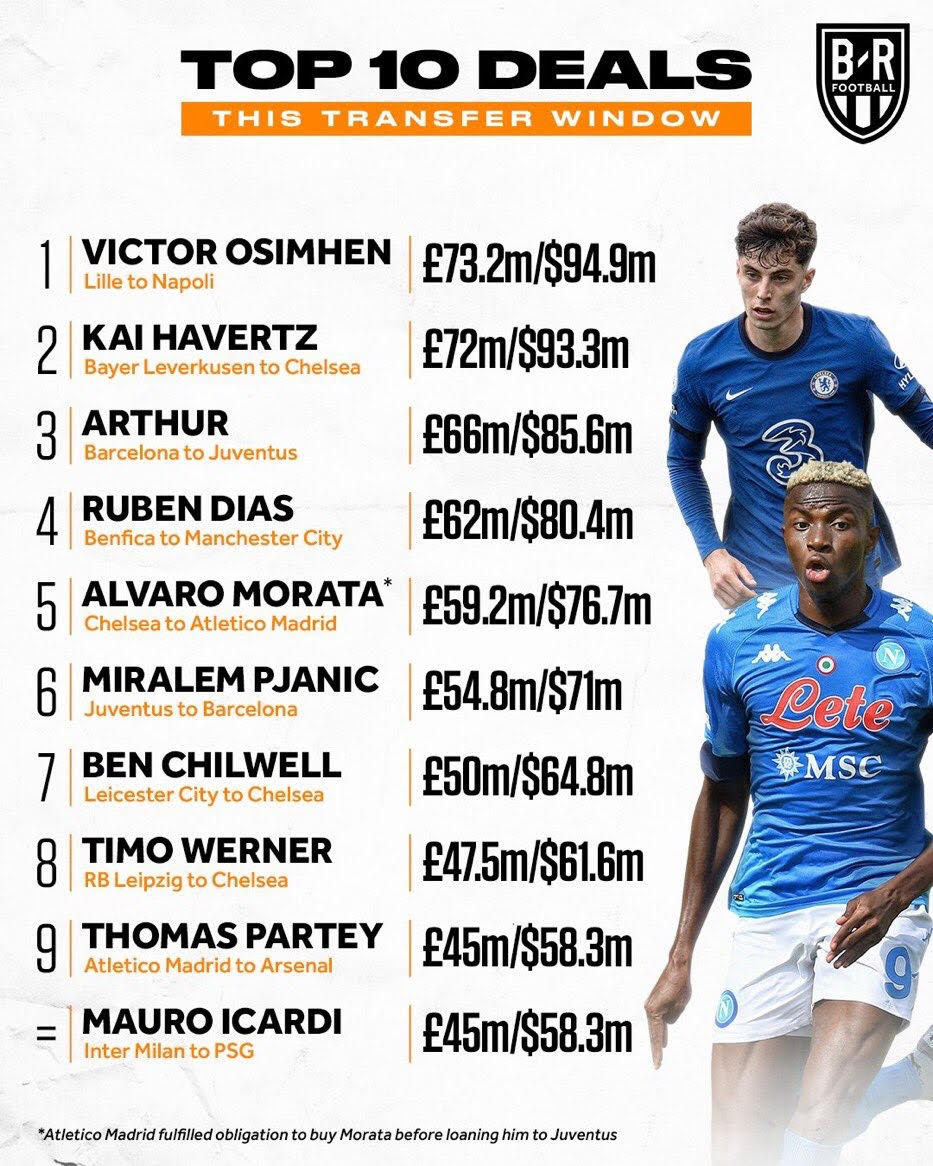 Ben Chilwell is in eight position with his £50m /$64.8m move from Leicester City to Chelsea. Thomas Partey is ninth on the list after moving from Atletico Madrid to Arsenal in a £45m /$58.3m , the biggest deal on deadline day.

27-year-old Mauro Icardi completes the top 10 with £50m /$64.8m deal from Inter Milan to Paris Saint-Germain after spending last season on loan with the French champions.

Players are the losers with only three substitutes – Guardiola

Players are the losers with only three substitutes –…