Totteham Hotspur’s winless run in the Premier League stretched to five games as George Baldock’s equaliser earned an impressive Sheffield United side a 1-1 draw on Saturday. 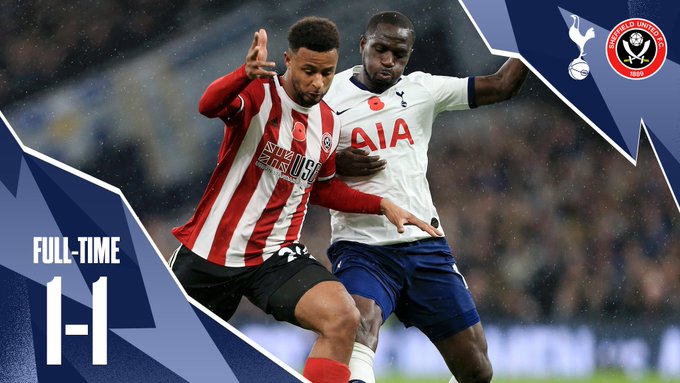 The hosts were fortunate to go ahead in the 58th minute through Son Heung-min’s goal and again when David McGoldrick’s apparent equaliser soon afterwards was ruled out by VAR.

Son’s goal was Tottenham’s first attempt on target but it failed to spark Mauricio Pochettino’s side into life.

Chris Wilder’s United kept plugging away and were duly rewarded when Baldock’s miscued low cross sneaked in at the back post, the goal was allowed to stand after another VAR check.

Tottenham showed belated urgency and Lucas Moura almost snatched a win in stoppage time when his piledriver was tipped over the bar by Dean Henderson.