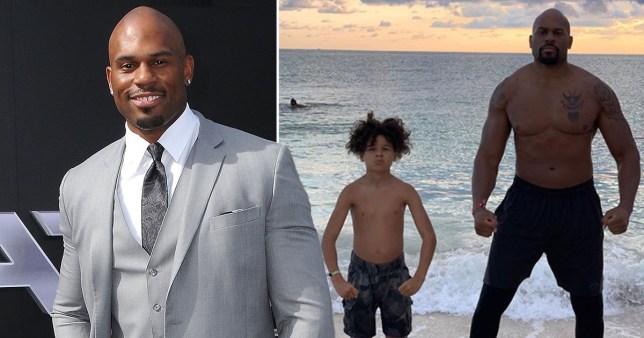 Gaspard had gone missing after he and his son were caught in a rip current while swimming in the sea at Venice Beach, California on Sunday afternoon.

When help arrived, the American heroically told lifeguards to save his son first, before being submerged by another wave.

The search for the popular missing star was called off earlier today, when the Los Angeles Police Department confirmed that his body had been found.

And tributes have been flying in from former WWE colleagues and fans alike for Gaspard – universally regarded as one of the nicest, most selfless men in the industry.

WWE legend Triple H wrote: “I join fans around the world as we remember Shad Gaspard as a beloved performer and a caring father. In absolutely tragic circumstances, please keep his loved ones in your thoughts.”

Dwayne “The Rock” Johnson added: “My prayers and hope for Shad Gaspard’s wife, son and family during this unthinkable time. Man, this is a tough one. A really tough one. Great guy.”

Former tag-team partner Titus O’Neill wrote: “My Love, Thoughts, Prayers and Support Go out to The Family of Shad Gaspard.

“Nothing will ever Fix the loss of a loved one. As a Universe We owe it to ourselves and to others to Be a Positive Light in this world as long as we can Because Nothing is Ever Guaranteed. #RIPSHAD”.

And Sasha Banks added: “Sending my love and prayers to Shad loved ones during this time. #RIPShadGaspard”.

My Love, Thoughts, Prayers and Support Go out to The Family of Shad Gaspard. Nothing will ever Fix the loss of a loved one. As a Universe We owe it to ourselves and to others to Be a Positive Light in this world as long as we can Because Nothing is Ever Guaranteed. #RIPSHAD ❤️🙏🏿

WWE is saddened to learn that former WWE Superstar Shad Gaspard has passed away at the age of 39. https://www.wwe.com/article/shad-gaspard-passes-away …

Canadian WWE star Natalya wrote: “The world has lost a wonderful human being. Shad Gaspard was a true HERO in every sense of the word. I’m keeping his family and loved ones in my prayers right now. We love you, Shad.”

Wrestling podcaster John Pollock offered a moving tribute: “Shad Gaspard left this world a hero – in every sense of the word.

“Above anything else he did during his time here, he is going to be remembered for his actions as a father, and that is an incredible legacy to leave behind.”

As well as wrestling royalty, Gaspard’s fans also took to social media to pay tribute to their hero.

One poignantly wrote: “Shad Gaspard chose his son’s life over his own. We should all strive to possess courage like that.”

And another remarked: “Shad Gaspard died to make sure that his son was rescued and taken to safety before himself.

Another devastated fan wrote: “RIP Shad Gaspard. A great wrestler back in the day with Cryme Tyme one of my favourite tag teams around. This man died saving his son, the ultimate sacrifice. Died a hero. Rest easy”.

WWE chairman and CEO Vince McMahon, prior to Gaspard’s body being found, last night wrote: “The thoughts of everyone at WWE are with Shad Gaspard’s family during this difficult time.”

Golfer ‘almost kills’ girlfriend by whacking her with ball

Lukaku: I will never forgive Villas-Boas