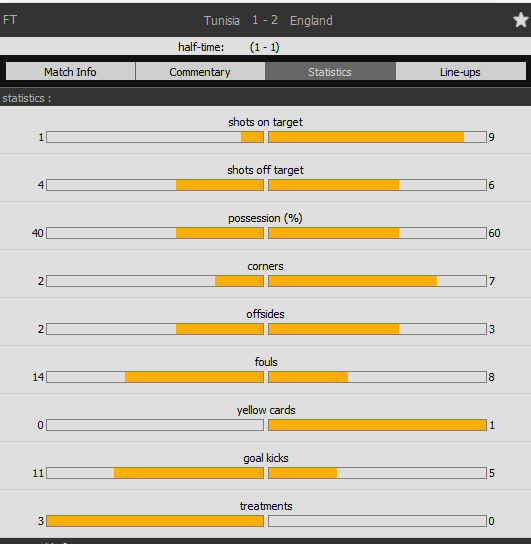 Speaking  after the match England striker Harry Kane, said England deserves the victory over the resilient Tunisian side.

He said, “I thought we played very well. There are always a bit of nerves, a bit of excitement, but we got into the game very quickly, it went to 1-1 and the momentum changed a bit. It is always in the back of your mind that it is not going to be your day but that is why you work for 90+ minutes.

“We wanted to create chances and we did that. We could’ve scored two or three goals and put the game to bed. I’m really pleased with how we played.

“Maybe a bit disappointed (to not get a penalty and for England to concede one) on the pitch their penalty looked quite soft. That is what VAR is there for. At a few corners I couldn’t move. We just have to hope the officials get it right. If they don’t think it is a penalty we have to deal with it.

“We are proud of each other and in a World Cup you are not sure how it is going to go, but we have a great togetherness and are always proud to see it come off in the game. We never panicked, never looked like conceding another one and got what we deserved in the end.

“We got told there would be a lot of flies and when we went out for the match it was a lot more than we though. We all had bug spray on and it was important as some of them went in your eyes, some in your mouth but it is about dealing with what comes your way.”

In the view of Tunisia coach Nabil Maaloul the risks came from set pieces.

He said, “When you have very tall players it is very difficult to counter them. They were much better than us when it came to those high balls.

“Harry Kane is one of the best attackers in the Premier League and that is why he is highly sought after by the highest clubs. I think he was behind the victory of the English team, it was him who was always at the right time and he is the optimum scorer.”

On his defenders holding Harry Kane when corners were being taken: “I have not seen those possible penalties, maybe if I go back and look at the match I can see what fouls were committed.”