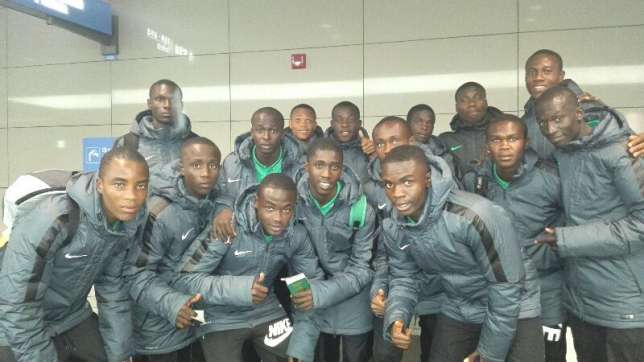 Nigeria’s Golden Eaglets began their quest for a third continental title at the 2019 U-17 Africa Cup of Nations on a blistering note on Sunday as they beat host Tanzania 5-4 in a thrilling encounter.

The Coach Manu Garba-tutored side showed great promise as they held their own against the Tanzanians who were playing in front of their vociferous home crowd.

It was Olatomi Olaniyan that got the curtain raiser scoring in the 21st minute for the Eaglets. But the hosts responded with a quick equaliser almost immediately through Edmund John.

The Golden Eaglets soon pulled away scoring two fantastic goals in the 31st and 37th minute through Wisdom Ubani and then Akinkunmi Amoo as the first half ended 3-1 in favour of the Nigerian lads.

It was the Eaglets that had the first real chance in the second half but the opportunity was blown away and that proved costly.

After Kelvin John reduced the deficit to 2-3, the Tanzanians were handed two debatable penalties by the referee in charge of Sunday’s opening game and the East Africans made the most of the chance and thus raced to a 4-3 lead.

The Golden Eaglets who were African champions in 2001 and 2007 continued to pile the pressure on the hosts and their efforts paid off as Ubani scored his second goal of the game to make it 4-4 before Ibraheem Jabaar fired in the winning goal in the 79thminute.

Nigeria will be up against Angola in their next group game before they face Uganda in their final group game.

The Eaglets, semifinalists at the U-17 AFCON, will be representing Africa at the U-17 World Cup later in the year.

Nigeria’s Golden Eaglets are the most successful team in the U-17 World Cup with five titles to their name.