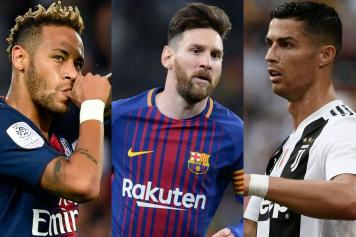 The Champions League returns to action on Tuesday with many exciting matchups coming up and many fantastic players featuring on the best stadiums of Europe. And Italy is in for a treat in the next 48 hours, as the country will host the likes of Cristiano Ronaldo, Lionel Messi, Neymar and Kylian Mbappe.

On Tuesday, Inter will face Barcelona at the San Siro, with Messi in the Catalan squad for the match, despite injury problems in the recent weeks. The Blaugrana have been somewhat mysterious regarding their phenomenon and it is not yet clear whether the player will start, or even play at all, tomorrow evening.

At the same time, Napoli will matchup at the Stadio San Paolo against PSG, who are loaded with superstars. But the biggest names in Thomas Tuchel’s team are obviously World Cup winner Kylian Mbappe and Brazilian star striker Neymar, who will look to help their team make a decisive step towards qualification in Italy.

READ ALSO: Messi Ready for Champion League Match against Inter Milan
On Wednesday, on the other hand, Cristiano Ronaldo will feature in Italy, which has become a regular occurrence for Italian tifosi, as he is now a Juventus player. The Portuguese striker will face his former team Manchester United and could help his own to guarantee first place in the group.It is not every day that a country hosts so many top players in the span of 48 hours, but Italy will have the four arguably best players in the world at the moment running around pitches on the Apennine peninsula, as their teams will look to minimize the impact of the best of the best.
Loading...
MarneyMbappeMessironaldo