Super Eagles striker, Peter Olayinka’s Slavia Prague will be looking to end their Champions League campaign tonight on a good note as they travel to German giants Borussia Dortmund. 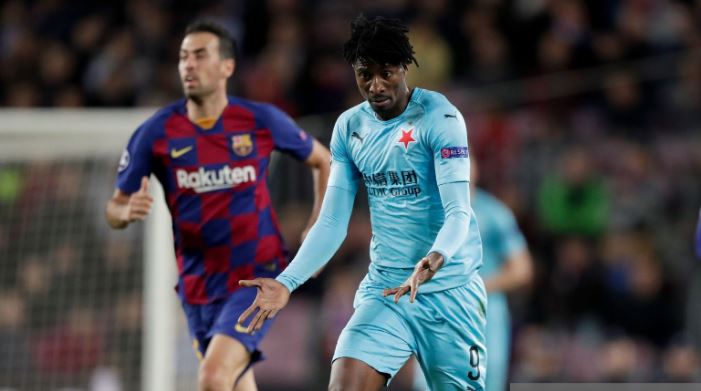 Slavia make the trip to the Westfalenstadion unable to move off bottom spot in Group E, despite having secured draws away at Barcelona and Inter earlier in the campaign.

Olayinka was highly revered  after scoring Slavia Prague’s only goal in their surprise 1-1 away draw against Inter Milan on Matchday one.

The Czech side came within a whisker of earning three points at Inter, taking the lead through Olayinka before Nicolo Barella rescued a point for Inter in stoppage time.

The Ibadan native was also outstanding in Slavia’s goalless draw away to Barcelona last month where he was a thorn in the side of Barcelona defenders with his physical presence and speed.

He had a 86.4 per cent passing accuracy and 41 touches to cap a good night against Lionel Messi- led Barcelona.

The 23 year-old has scored five goals in 22 games for the Czech champions this season but hasn’t found the back of the net since Slavia’s 2-0 win away to Jablonec in October.

Olayinka has been capped once by Gernot Rohr, coming in for Samuel Chukwueze in the 89th minute in Super Eagles 1-1 friendly draw with Brazil in Singapore in October.