Victor Osimhen netted a brace, including a brilliant individual goal, as Kelechi Iheanacho also provided a fantastic assist in Leicester City’s 2-2 UEL draw with Napoli at the King Power Stadium.

The encounter saw Napoli stage comeback from 2-0 down for a precious draw away to Leicester City thanks to Osimhen brace, and it was the very least they deserved.

The Partenopei have won all three games so far under new coach Luciano Spalletti, but the Europa League group stage opener at the King Power Stadium. Diego Demme and Mario Rui were injured, although captain Lorenzo Insigne pushed through a knee issue to start. Leicester had Yannick Vestergaard back, but benched Jamie Vardy and Youri Tielemans.

They didn’t heed that warning and Leicester took the lead moments later, as Barnes burst down the left with a give-and-go from Daka, floated the cross to the back post where Ayoze Perez was relatively unmarked for a cushioned volley. Giovanni Di Lorenzo got drawn too centrally, very similar to the goal Italy conceded to England at the EURO 2020 Final.

It really should’ve been 1-1 on 36 minutes when Osimhen pulled back from the by-line for Piotr Zielinski, but ex-Atalanta man Timothy Castagne got back for a sensational block from six yards.

Insigne and Osimhen couldn’t find the target from very promising positions, then when Lozano’s free header was on goal, Kasper Schmeichel made the good save.

Napoli were dominating chances and possession, but risked going 2-0 down on the hour mark when Daka fired in a Youri Tielemans through ball. However, the Leicester striker was inches offside.

The Foxes had the ball in the net again moments later and this time it did count, as Harvey ran onto the Iheanacho slide-rule pass and nutmegged Malcuit with the finish. It was a classic counter-attack goal, as almost the entire Napoli team was in the opposition half.

The Partenopei finally made one of their opportunities stick with a well-worked team goal. Insigne and Eljif Elmas combined quick passes, Osimhen with his first touch flicked the ball over Vestergaard, the second over on-rushing Schmeichel. 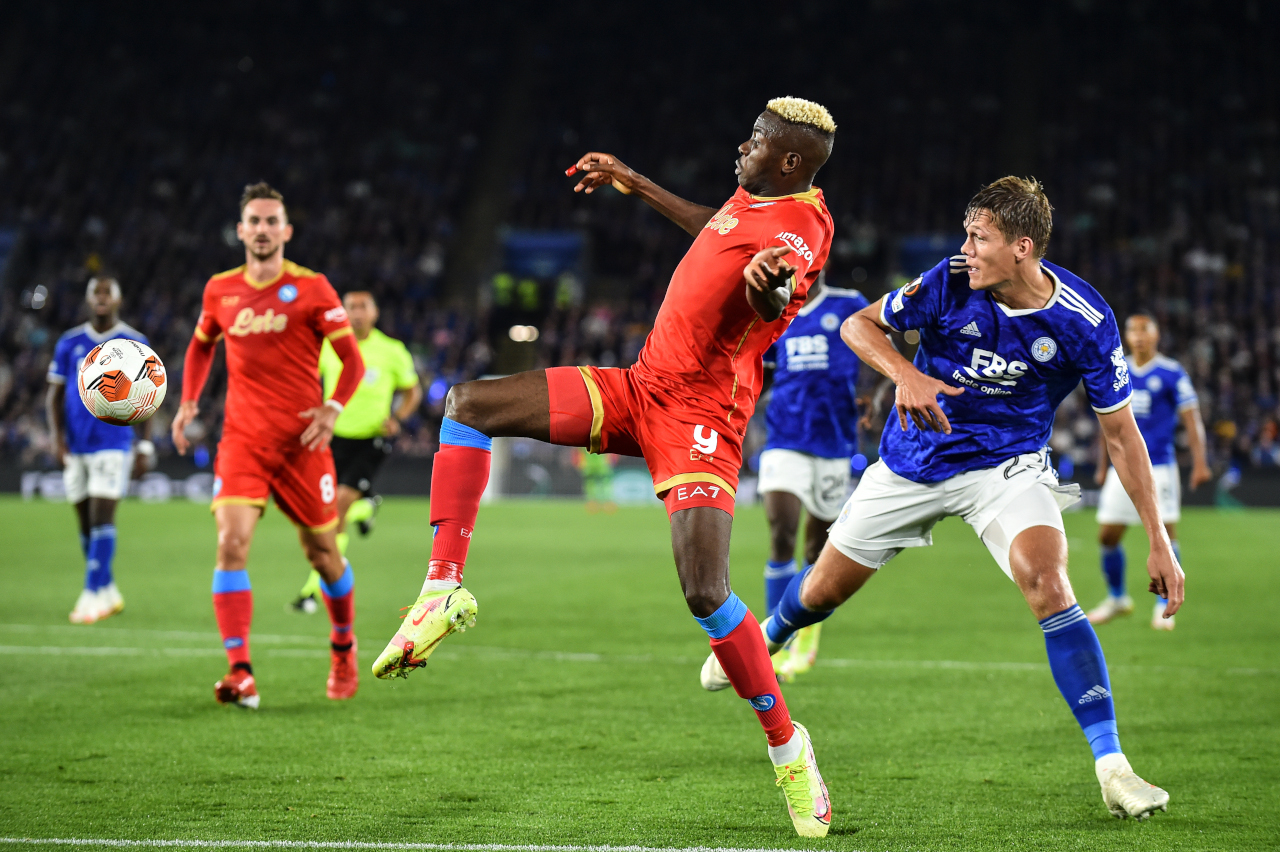 Napoli kept pushing and got their more than deserved equaliser in the final minutes, Politano floating a cross from the right and Osimhen hanging in the air for what felt like an eternity to nod into the far top corner.

The Italians felt they deserved all three points and continued going for them, Amir Rrahmani nodding a free kick over the bar in stoppages.

The pressure just grew on Leicester, with Ndidi sent off for a second bookable offence.