The Flying Eagles of Nigeria suffered a slight setback in their quest to win their first U-20 FIFA World Cup following a 2-0 loss to the United States of America (USA) on Monday night.

Paul Aigbogun’s team began the tournament in Poland on a comprehensive note when they whitewashed Qatar 4-0 and needed a win to guarantee qualification to the next round against the American side.

However, the USA had other plans having lost their first game against Ukraine, they came out of the blocks flying and controlled possession with quick-short passes and speed.

The USA had a shot deflected onto the post and it went behind for a corner. From the resultant set piece, Sebastian Soto was left unmarked inside the box and he rose highest to head past Olawale Oremade in goal for the Flying Eagles. 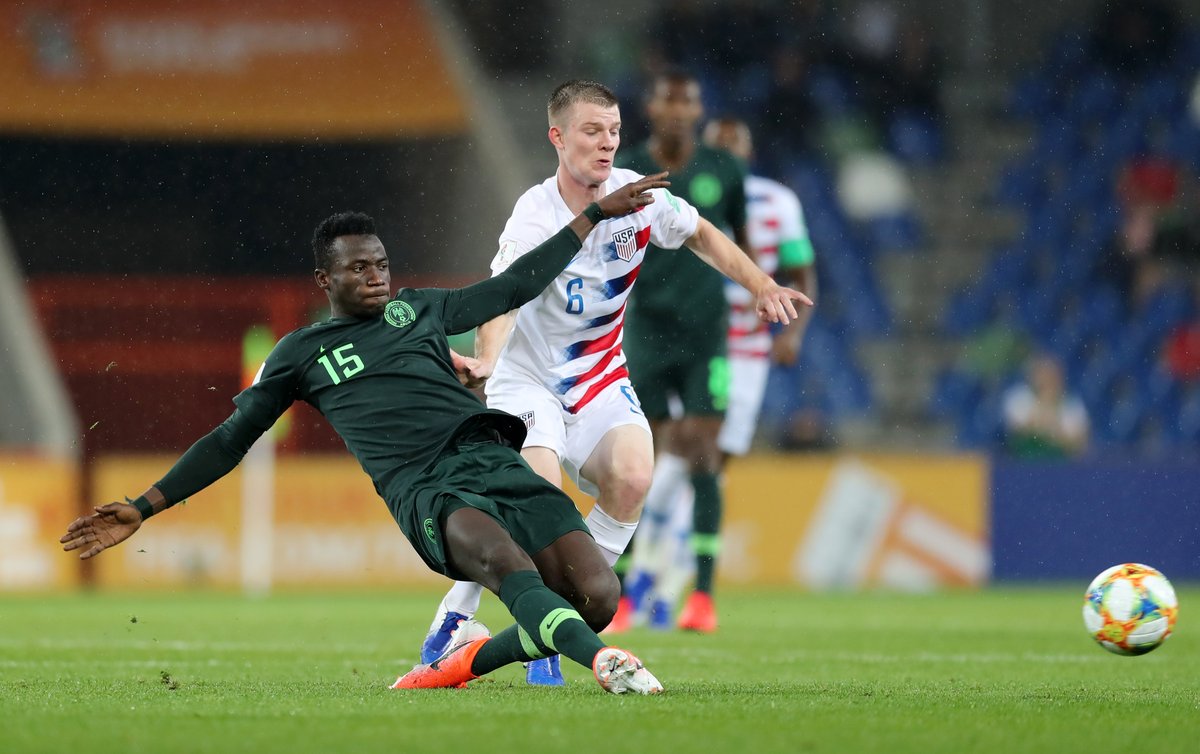 Aigbodun reacted by introducing Aniekeme Okon for the ineffective Ayotomiwa Dele-Bashiru in midfield. The Flying Eagles responded as Kingsley Michael let one fly from 25yards but his efforts came off the post. Substitute Okon, also saw a powerful right foot shot saved by the USA goalkeeper.

The American team finished the first half the stronger side as they had a goal ruled out for offside before Timothy Weah, son of Liberian President George Weah, saw his shot come off the post after an awkward deflection from the edge of the post.
USA doubled their lead with 35 second after the restart as Soto latched onto a clever pass from left back Gloster and stylishly dinked over the Nigerian goalkeeper to make it 2-0.

The goal prompted another change from the Flying Eagles technical bench as Muhamed Tijani came on for Akor Adams and his first contribution in the game was injure US defender, Chris Richards, who was immediately replaced by mark McKenzie at the heart of defence.

McKenzie did not look comfortable and fouled Kingsley Michael for a penalty but after consultations with the Video Assistant Referee (VAR), the decision of the referee was reversed and an offside call given against Nigeria.
Zulkifilu Rabiu tried an audacious bicycle kick but his effort was well saved by the USA goalie Scott.

The Flying Eagles never got a grip of the game as the much quicker and sleek USA team controlled the match and ran out 2-0 winners at the end. The victory gives the USA three points, same as the Flying Eagles, who sit second courtesy a better goals difference.

Nigeria will face group leaders Ukraine in their final match in Group D while USA plays bottom side, Qatar on Friday, 30th May, 2019.