Van Dijk: I want to be a Liverpool legend

Since being snapped up from Southampton in January 2018, the Netherlands international has enjoyed a meteoric rise to prominence on Merseyside. 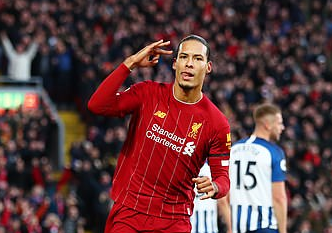 A £75 million ($92m) transfer package was required to secure his services, but an immediate return has been offered on that investment.

Van Dijk is the reigning UEFA Player of the Year and ran Barcelona icon Lionel Messi close in the last Ballon d’Or vote.

The 28-year-old has proved to be one of the final pieces in the puzzle for a Liverpool side that had been starved of success before enjoying a trophy-laden 2019. He is already firmly established as a fan favourite at Anfield, but the intention is to ensure that his legacy lives on long past the end of his playing days.

Van Dijk told Sport when asked how he would like to be remembered when the time comes to retire: “As a Liverpool legend.

“I want to achieve incredible things here. We have a fantastic team, we don’t lack anything, we have all the tools necessary to on winning: a coach that we identify with, a versatile squad, a style of play that breeds victories, a stadium and supporters that play their part.

“Yes, I would like to be one of those players that return to Anfield after retiring. I see club legends at games and I feel part of a really big family.”

Van Dijk has come a long way in a relatively short space of time, with Celtic having brought him to British football from Groningen in 2013.

He now boasts Champions League, UEFA Super Cup and Club World Cup winners’ medals, with the hope being that a Premier League title will be added to that collection at some stage in the near future.