The Belgian midfielder was speaking to the official club website after guiding his side into the FA Cup semi-finals following a 2-0 win away at St James’ Park.

But just as he was analysing the game, former Manchester United defender Bruce came behind him and jokingly put his arm around De Bruyne before stating that he was Newcastle-bound.

Hang on a minute there, Steve! 😂

“That’s an exclusive coming out of Newcastle tonight. He’s had enough of Manchester City and he’s going to come to play for Newcastle!’

De Bruyne couldn’t help but laugh before he and Bruce exchanged pleasantries and the interview resumed.

On his 29th birthday, De Bruyne opened the scoring with a first-half penalty after Gabriel Jesus was fouled before Raheem Sterling added a second to set up a semi-final meeting with Arsenal at Wembley.

Playing in a slightly deeper midfielder role but still running the game and causing problems galore for Newcastle, De Bruyne was happy to return to winning ways following the defeat to former club Chelsea on Thursday – a result that gave Liverpool their first league title for 30 years.

“We started really well, were sharp and put them under pressure,” he said, as per the Daily Star.

“We should have scored more.”

“We had a few problems with penalties this year. The gaffer asked me to step up and I have scored a couple now.” 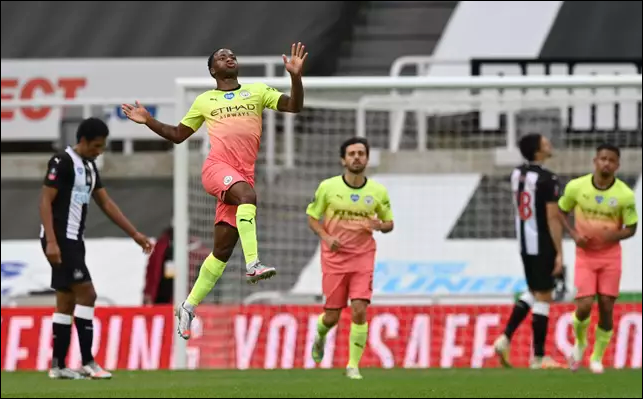 Read Also: Robben reveals why he came out of retirement

City had some serious difficulty from 12 yards, with Sergio Aguero, Jesus and Sterling all missing in games prior to the break.

But talisman De Bruyne has now rolled in his last three, including the winner away at Real Madrid in the Champions League, and firmly established himself as the team’s chief penalty taker.