VIDEO: The goal that never was that annoyed Cristiano Ronaldo

Cristiano Ronaldo has dominated Real Madrid news in recent times, with many linking the Portuguese with a return to the La Liga to put an end to an ultimately unsuccessful spell at Juventus. He was signed to win the Champions League, an ambition that’s further to being unfulfilled now than when he arrived in Turin. 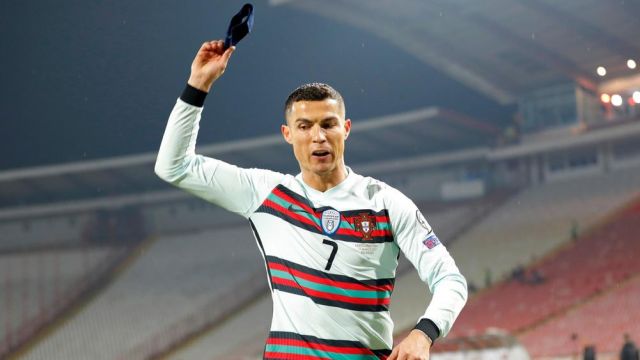 Juventus were dumped out of the Champions League at the last 16 stage this month to Porto, their third consecutive early exit from Europe’s elite competition since the Portuguese joined the club for €100m in the summer of 2018. They followed that up with an embarrassing defeat to lowly Benevento, and that frustration has spilled over into Ronaldo’s time on international duty this week with Portugal.

What drama at the end of Portugal vs Serbia. Ronaldo scores but no goal line technology. pic.twitter.com/wa6ZgFp2qd

Portugal played Serbia last night in a World Cup qualifier for Qatar 2022, and were drawing 2-2 in the final minute of injury time when Ronaldo scored a goal that never was. His effort, which would have won the game, was clearly over the line, but an absence of VAR meant that it wasn’t given. Ronaldo, clearly enraged, ripped off and threw his captain’s armband away at the end of the game, which finished 2-2. The result will have stung given they had held a two goal lead.

Mancini not surprised by Turkey form

Lingard: I wasn’t expecting anything when I signed for…