Unai Emery has revealed that a conversation with his Spanish compatriot and Watford manager Javi Gracia convinced him to become Arsenal’s manager last summer. 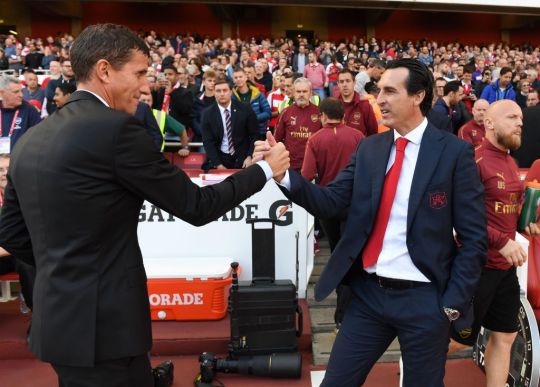 Despite leading PSG to a domestic treble in 2017-18, Emery left the Ligue 1 club at the end of the season before accepting Arsenal’s offer to replace the outgoing Arsene Wenger.

Emery has earned plaudits for the job he has done at the Emirates, steering Arsenal into top-four contention as well as the Europa League quarter-finals. Another Spanish manager to impress this season is Gracia having led Watford to the FA Cup final as well consolidating their position in the top half of the Premier League.

‘When the possibility opened to sign here, the first coach, the first person in the football world I called was him [Gracia],’ Emery said. ‘I asked some questions about the football here, the clubs, Arsenal, and he recommended to me that I come here.’ Emery added:

‘For example, we had dinner, their coaches and our coaches, one day in St Albans in September. ‘We spoke about football here, English football and their experience because they were here six months before us. It was a good conversation about football because Javi Gracia is also a football man.

‘They are my friends, not only Javi Gracia but also his assistants Zigor Aranalde and Inigo Arteaga.’ Arsenal beat Watford 2-0 at the Emirates earlier in the season, although it took an own goal from Craig Cathcart and a strike from Mesut Ozil in the final ten minutes to seal the victory.

Emery will be hoping for a similar outcome when Arsenal head to Vicarage Road on Monday night but he accepted it will be a difficult game given the good form Watford have been in.

Pogba sends warning to Barcelona ahead of Champions League showdown