It seems that Roberto Jimenez’s stay at West Ham United could come to an end in January, with Football Insider reporting that the club are willing to listen to offers for the goalkeeper. 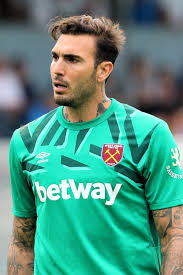 The Spanish shot-stopper joined the Hammers on a free transfer in the summer having left Espanyol.

He was signed as Lukasz Fabianski’s understudy, but he has ended up featuring quite a lot due to the Polish international’s injury problems.

However, in the six games he has started, he has conceded 14 goals while the team lost five of those matches, drawing the other (Transfermarkt).

He has really struggled in the Premier League and was ultimately dropped by Manuel Pellegrini for their match against Chelsea recently, with David Martin starting.

It seems that his poor performances have led to the club making him available for transfer in January, with Football Insider suggesting that they are already eyeing up a replacement.

Most West Ham fans wouldn’t be too upset to see him leave, but many are sceptical about being able to ‘sell him’ as the report suggests they want to do, believing that nobody would pay a fee for the 33-year-old.

FA Cup: Guardiola calls for replays to be scrapped

FA Cup: Guardiola calls for replays to be scrapped