It was some sort of sweet melody for Wimbledon sensation Coco Gauff as she met her idol Michelle Obama on Thursday.

The 15-year-old who became the breakout star of this year’s Wimbledon, was invited to meet the former First Lady, at her office in Washington, D.C.

The pair both shared photos on their respective Instagram accounts, with Coco calling Mrs Obama a ‘true inspiration’ and Michelle returning the praise by hailing the talented schoolgirl a ‘wonderful young woman’.

Coco confessed that she was nervous meeting the woman she has very high regard for but admitted that the meeting was indeed inspiring. 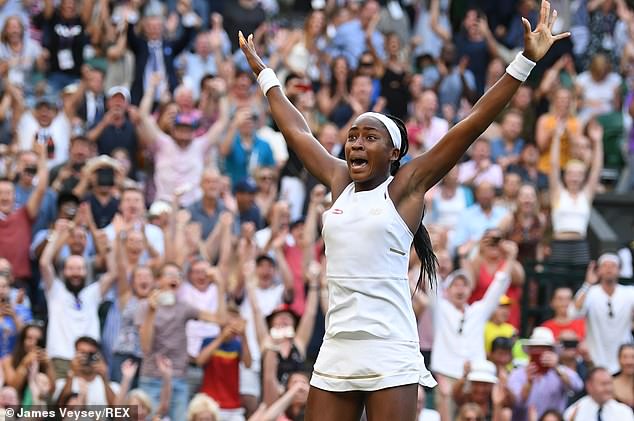 Mrs Obama gave the tennis ace a signed copy of her bestselling memoir Becoming, with the message: ‘To Coco, I wish you courage, strength, joy and love on your journey to become more. Warmly, Michelle Obama.’

The tennis star on her part gave her host a signed tennis racquet as a gift.

In her post of the meeting, Mrs Obama wrote: ‘This afternoon, I was thrilled to visit with @CocoGauff. When we talk about the potential of our young people, we often think about it as some far-off promise, years or decades away.

‘But the truth is they have so much to offer us right now—something we all saw a few weeks ago at Wimbledon. Coco is a wonderful young woman who’s showing us that we don’t have to wait to see what the next generation can do.’

Last month Coco captured the hearts of the nation and celebrity fans when she enjoyed a fairytale run to the fourth round of Wimbledon.