Why we stayed away from Isaac Promise’s burial – NFF

The Nigeria Football Federation says it has refrained from responding to the cacophony of falsehood and misrepresentation over its absence or otherwise from the final funeral rites of former Nigerian international Isaac Promise because it was most concerned with the safety and well –being of his immediate family. 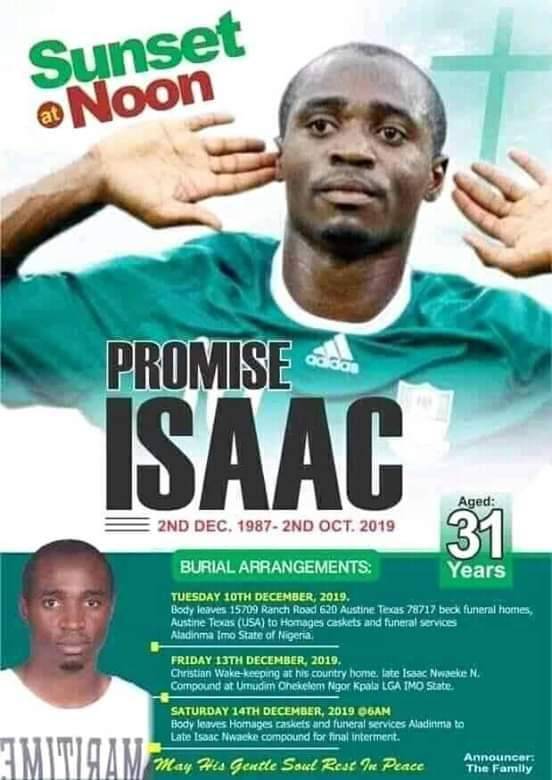 NFF’s Director of Communications, Ademola Olajire reiterated on Friday that the Federation has always, is presently and will always show concern on issues that affect Nigerian players (active, retired or departed), and has without recourse to noise and grandstanding, doing its part for the immediate family of late Isaac Promise.

“The NFF has been in regular contact with and has offered support to late Isaac Promise’s wife and children. When the player died in the United States of America, the NFF immediately contacted the club and we were assured of the responsibilities of the club, which included flying his remains to Nigeria.

“However, some of his siblings outrightly expected the NFF to foot the entire bill of his burial, which we told them was not possible. The NFF offered to foot part of the bill for the burial but from that moment, they were not happy with the Federation.”

“We know what we have done and still ready to do for the immediate family without joining in the debate going on in sections of the media.

“The NFF President has approved a sum of money to be paid to the immediate family and that money will be sent to his wife in the next few days.”

On her part, the wife of late Isaac Promise has commended the Nigeria Football Federation for its efforts since the passing on of her husband, who captained the Nigeria U20 team to runner-up position at the FIFA U20 World Cup in The Netherlands in 2005, and was also a key member of the U23 team that won silver medal in the Men’s Football Tournament of the 2008 Olympics in China.

Mrs. Kate Promise expressed surprise at the negative stories in sections of the media while confirming that the NFF President indeed mandated Mr. Ndubuoke and Mazi Uchegbulam to broker between her in-laws and herself.