Willian called up by Brazil as Neymar’s replacement

After a poor showing by Brazil in the 2018 FIFA World Cup, where they exited the competition in the quarterfinals by losing to Eden Hazard’s Belgium, Brazilian national team coach Tite decided to revamp the aging and under-performing squad. 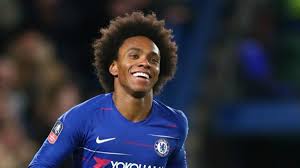 That lead to the gradual culling of some players, including Chelsea forward Willian.

The 30-year-old last played for Brazil in the November international break last year against Cameroon and did not do enough to earn a recall back in March. The trend was set to continue in this summer’s Copa América.

But today, Willian was recalled for national team duty by Tite to replace Neymar, who has been ruled out with an ankle injury, which he picked up during a friendly against Qatar.

Willian, who has 8 goals to his name in 65 appearances for the Seleção, will wear the No.10 shirt vacated by Neymar since Copa América rules limit national teams to use numbers from 1 to 23.