Ahead of the 2018 FIFA World Cup in Russia, Senate President Bukola Saraki (CON) has doled out the sum of N18m (50,0000USD) to the Super Eagles to help boost their morale for the Mundial.

The Senate President has also pledged undisclosed monetary reward for every un-replied goal the team scores at the tournament.

This was revealed on Tuesday by Saraki when he visited the team at the Transcorp Hilton in Abuja.

“I have been following the performances and general behaviour of this squad. I must confess that I am very impressed. We no longer have schisms and different camps in the same camp, and you sacrifice a lot for the country without demanding so much before you go to battle. 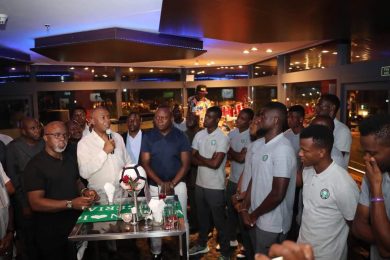 “From the captain, Mikel Obi to the newest member of the squad, I assure you of the love of the entire country and the well –wishes of every Nigerian as you go to the FIFA World Cup and in fact, in all your endeavours,” he said.

President, Nigeria football Federation Amaju Pinnick lauded Saraki for his proven love for, support and encouragement of the three –time African champions during the FIFA World Cup qualifying race and even before.

“The Nigeria Football Federation and this team are indebted to you for your huge support all the time. Your love and keen interest has contributed much to keep this team going and reaching for higher heights.

“I must note that we are lucky to have a manager like Rohr who himself is calm, focused and very dedicated to his job, as well as a captain like Mikel who is very humble and God-fearing. The sky will be the limit for this team.

“The Nigeria Football Federation and this team are indebted to you for your huge support all the time. Your love and keen interest has contributed much to keep this team going and reaching for higher heights.”

Rohr insists: I will parade Eagles’ best against England