Asuka and Otis were victors as they claimed the respective women’s and men’s Money In The Bank briefcases in one of WWE’s most-bizarre ever matches.

And fans were also left fearing for the health of the legendary Rey Mysterio and Aleister Black after Baron Corbin threw both stars off the roof of WWE’s headquarters.

For the first time ever, the stakes were raised as both the men’s and women’s matches took place simultaneously at WWE headquarters in Stamford, Connecticut.

The 12 total men and women began the match on the ground floor of Titan Towers and battled all the way to the roof where the coveted briefcases – containing a guaranteed title shot – were waiting hung up above a ring.

And it was Otis who outlasted the other five male competitors after a bonkers match that threw up surprise cameos from WWE’s past, including Doink the Clown, Brother Love and John Laurinaitis.

FULL RESULTS FROM MONEY IN THE BANK
AJ Styles and Baron Corbin were fighting over the briefcase at the climax when Elias suddenly arrived to slam his guitar into Corbin.

That left Styles in possession of the case, but only for a moment as he fumbled it and watched on agonisingly as it fell into the arms of Otis.

That moment came just seconds after Mysterio and Black had both been tossed from the roof by Corbin.

Otis now has the right to cash in his Money in the Bank contract for a world title match at any time after overcoming those four and Daniel Bryan.

The women’s match had a stacked field with several former champions in Asuka, Nia Jax and Carmella. 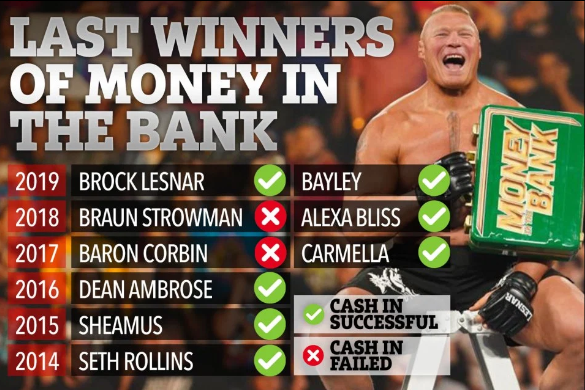 But it was the Empress of Tomorrow who fended off Evans and Jax – and also Corbin as he simultaneously attempting to collect the men’s briefcase, to claim the win.