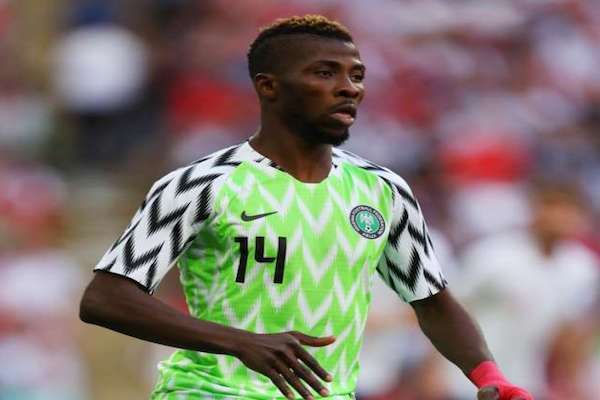 Following Kelechi Iheanacho’s ouster from Super Eagles 23-man African Cup of Nations (AFCON) list, ex International Mutiu Adepoju wants the Liecester FC forward to fight more and work harder to reclaim his stake in the team.
Adepoju said this in an interview with the News Agency of Nigeria (NAN) in Abuja on Sunday after the team released it’s best legs for the continental showpeice.
The 23-year-old cannot boast of an exciting performance at the just concluded season with a goal and three assists in 30 appearances.
“The coaches made their selections based on performance and his non inclusion means he did not meet up the manager’s demands,” Adepoju, who plied his trade during his playing days in Spain, said.
“He is still young and has a lot of time on him. He should work harder and fight more. He has to earn his place in the team”.
Rotherham’s United Semi Ajayi also did not make the cut as the duo were dropped from the earlier 25 players invited to camp.
Both players also did not feature on Saturday, as Nigeria was held to a 0-0 draw by Zimbabwe in an international friendly played in Asaba.
However, in contrast to Iheanacho, Ajayi could boast of a relative good season with seven goals and one assist in 42 appearances and was named at some point in the English Football  League team of the week last season.
About Ajayi, Adepoju said: “Ajayi performed well last season but I think the coach has a lot of options in his position”.

Nigeria is in Group B with Madagascar, Guniea and Burundi for the tournament scheduled to begin on June 21.
The Full List:

Nigeria vs Senegal: Eagles train in Ismailia ahead Senegal friendly