Indications that Taifa Stars of Tanzania have adopted a fight to the finish approach towards the 2019 AFCON qualifiers emerged Saturday as  the team held the Cranes of Uganda to a goalless draw at the Mandela National Stadium in Kampala. 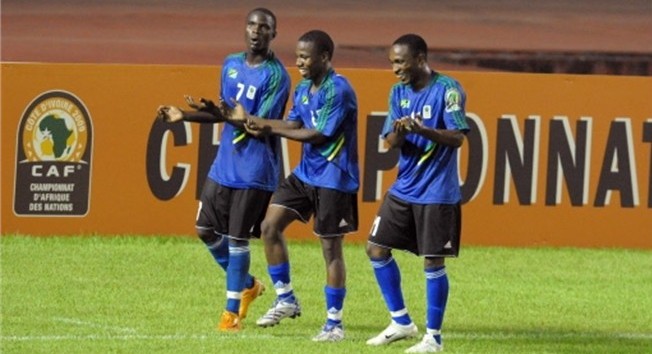 The Emmanuel Amuneke tutored side stood their ground from the first blast of the whistle even as the homers fought tooth and nail to earn victory to no avails.

Taifa Stars players and officials who were tickled by the excellent result which went contrary to permutations in some quarters that the team will lose away, lifted Amuneke who led Nigeria’s Under 17 side to the world cup victory in 2015 in Chile, off the ground in celebration of the vital point gained in Kampala.

Prior to Saturday’s tie Tanzania were placed third in the group with Cranes of Uganda leading the pack with three points followed by Lesotho and Tanzania on a point each while Cape Verde Islands with no point.

Saturday’s result has moved Tanzania the second position with two points behind Uganda with four points.

Tanzania had held Lesotho to a 1-1 draw before the coming of Amuneke and will next host Cape Verde Islands on October 10th a match which the Taifa stars will be hoping to win with panache especially with Amuneke’s determination to turn the fortunes of the team. Lesotho hosts Cape Verde Islands tomorrow.